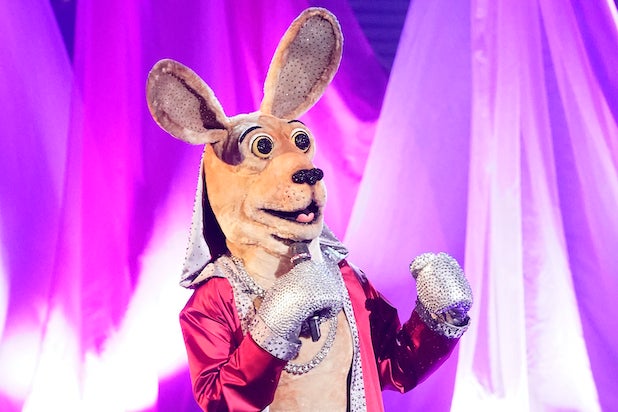 (Warning: This post contains spoilers for tonight’s episode of “The Masked Singer.”)

Tell us how we’re supposed to breathe with no Kangaroo on next week’s “Masked Singer”? Well, we’ll just have to try, seeing as she was the contestant eliminated/unmasked on Wednesday’s episode and revealed to be model and reality TV star Jordyn Woods.

And though Woods is now gone, she told TheWrap a fun fact that might soothe the pain of losing Kangaroo: the very, very specific reason she chose to sing Jordin Sparks and Chris Brown’s “No Air” on tonight’s installment, which she didn’t know would be her last “Masked Singer” performance.

“I mean, everyone loves ‘No Air.’ Jordin Sparks is amazing,” she told us, for starters.

Also Read: 'The Masked Singer' Reveals Another Celebrity Contestant: And the Kangaroo Is... (Video)

“Well, I did it on purpose because from the first day, from the first guesses from the judges, I got Jordin Sparks,” Woods added. “And my heart sank when I heard ‘Jordin’ because I was like, ‘Oh no, they already got it.’ So then I was like 1) I love that song, 2) It’s really good vocally, it’s a little bit challenging.”

Ultimately, Woods thought it was “fun” to go with that after people thought she was the “No Air” singer herself. “And that’s one of the biggest compliments ever. She’s amazing vocally.”

Another big compliment was the judges’ guess that the Kangaroo was singer India.Arie, who is one of Woods’ “absolute favorite artists.”

“And to get that, I was– you have no idea,” she said. “When you saw me jumping in the first couple episodes as the Kangaroo, I wasn’t in character. That was real excitement because of the guess.”

When it comes to how Woods came to compete on “The Masked Singer’s” third season in the first place, it’s thanks to a little push from her vocal coach, who happens to work on the show.

“I’ve always loved music. I have never sung outside of my house, besides my car, other than being on this show,” Woods said. “But my vocal coach, who I started working with a long time ago, he’s actually one of the main vocal coaches on the show. And so he had mentioned me to Fox just because he believed in me, had faith in me, and just to see what they would say. And then next time I saw him he was like, ‘Hey what do you think about this show? Would you ever want to do it?’ And I was like, ‘You know, let me watch the show first.’ So I watched it, became a fan and got totally invested into the season, which was last season.”

“And then next thing you know, Fox emailed,” she continued. “And I was like, ‘This is an opportunity of a lifetime that I just cannot pass up, even though I’m terrified. I’m nervous.’ And I just kind of went for it. I worked really hard to make sure I was ready to be on the show, too.”

Looks like so worked hard enough, seeing as Woods made it to the Top 8 out of 18 contestants.