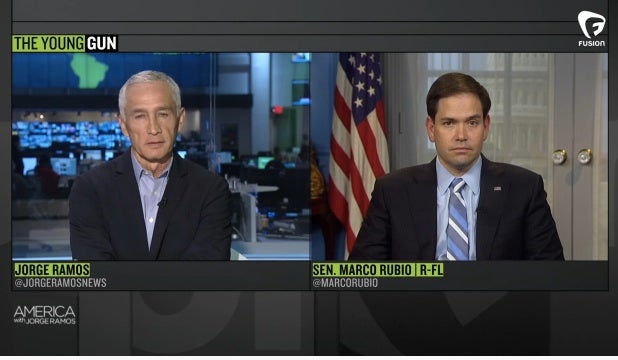 Marco Rubio danced around an answer on whether he would attend a same-sex wedding for someone in his family in an interview with Fusion’s Jorge Ramos Wednesday.

“If there’s somebody that I love that’s in my life, I don’t necessarily have to agree with their decisions or the decisions they’ve made to continue to love them and participate in important events,” Rubio said.

The presidential candidate went on to compare people attending same-sex weddings of people who’ve been divorced, which is outlawed in the Catholic faith. Not sensing he got a real answer, Ramos asked again if he’d attend a same-sex wedding himself.

Rubio said his beliefs come from the Catholic chuch, but if people want to change the definition of marriage, they should petition their state to get it on the ballot.

After announcing his run for The White House Monday—a day after Hillary Clinton—Rubio has done the expected Fox News circuit as well as Fusion and some radio. It will be interesting to see if and when he chooses to speak to a more liberal outlet like MSNBC.