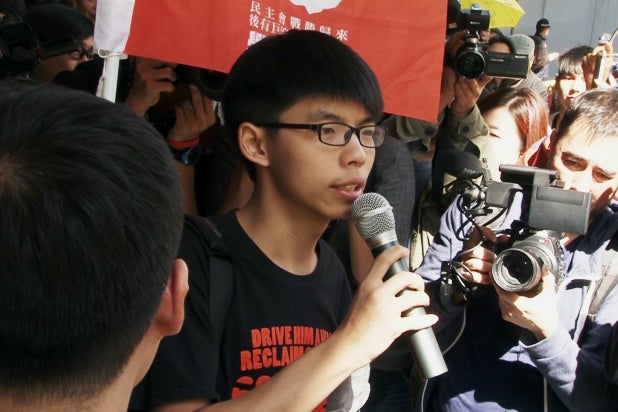 Joshua Wong is undeniably impressive. A Hong Kong activist since the age of 14, Wong has been an unrelentingly democratic force inside an authoritarian regime. He’s galvanized a country into action. He’s spearheaded protests, energized constituents, relayed the youth and inspired fellow citizens to use their voices for good, rather than being content with a government uninterested in serving the people.

In 2014, he received a nomination for Time’s Person of the Year. A year later, Fortune recognized Wong as one of the world’s greatest leaders. For Wong, compliments quickly turn into facts. In the history of human civilization, there’s never been a 20-year-old with a more accomplished CV.

Beyond providing context, it’s worth leading with this information. Above all, it’s important to understand Wong’s place in modern times — an impassioned activist turned makeshift politician whose motivations appear to be, mostly, benevolent. Consequently, it was only a matter of time until a documentary like “Joshua: Teenager vs. Superpower” was made. Wong’s life is inimitable. If someone tried to make a dramatic feature about him, audiences would scoff at the absurdity.

Also Read: PBS' 'The Story of China' Is 'People's History' of World Superpower

But as chronicled in director Joe Piscatella’s film, Wong’s life is all too real. We jump immediately into the nascent stages of Wong’s activism, where he’s beginning to protest the National Education agenda being imposed by the Chinese government. In a particularly stirring scene, the camera focuses on Wong contesting Chief Executive of Hong Kong CY Leung. “It says you’ll get good grades if you match the government’s views,” yells Wong.

And he’s right. The curriculum has been constructed to limit ulterior thought. Reiterate what the professors “teach” and, subsequently, you’ll be rewarded. This academic approach is more interested in call-and-response than enlightenment. Wong not only identifies the hypocrisy, but he also voices his frustration. Leung responds meekly. He’s an esteemed politician who won’t publicly engage with the plight of dissident teenagers.

Watching this interaction (among others) unfold is riveting. It requires no additional cinematic contributions. Here begins Piscatella’s problems as a documentarian. Throughout “Joshua: Teenager vs. Superpower,” he’s unwilling to let his subject breathe. This is a film of highs and lows; there is no middle ground, no moment of silence, reflection or introspection. “Joshua” stays frustratingly on message. It’s like watching a prospective candidate give a mannered and rehearsed 80-minute speech on the campaign trail.

Joshua speaks authoritatively,  but not interestingly, about his views; in fact, the robotic nature of Wong is pointed out, very briefly, in one scene. “I don’t know how to be his friend,” admits one classmate and fellow activist. “He shows no emotion.”

Wong’s polished reticence is not the fault of Piscatella. We can’t expect our documentarians to enliven their subjects or to fundamentally change who they are. However, it’s clear someone working on this film understood what (and who) they were dealing with. In an attempt to energize the proceedings, Piscatella cuts to innumerable index cards and talking-head interviews (academics, lawyers, political commentators, journalists).

Once again, though, the film refuses to let any person be a human. It becomes blatantly obvious that each talking head is provided leading questions. There isn’t a statement presented in the documentary that doesn’t feel like they had the subject do several takes.

The issues with the documentary are not so much aesthetic as intellectual. “Joshua: Teenager vs. Superpower” surveys the socio-political climate of China with the simplicity of its title. Hong Kong residents, namely Joshua, are the heroes. The government is the villain. What’s occurring in China’s authoritarian regime is horrifying and cannot be compared to the film’s shortcomings.

A movie is a movie, and their reality is something to be taken seriously. Piscatella clearly cares about his subjects. He’s not hasty or unsympathetic, but the film does lack a certain curiosity. Throughout, there’s a similar structure to how events are portrayed. It unfurls in, roughly, four steps:

1) Joshua delivers a rousing (if monotone) monologue about the tyrannical nature of the Chinese government; 2) The film pivots to news clips or on-the-ground footage of Joshua delivering a protest speech surrounded by a sea of people; 3) It reverts to talking-head interviews where (mostly) adults sing the praises of Joshua (“courageous,” “brave,” “impressive”); 4) Inevitably, Joshua is detained, arrested or silenced by local police.

What follows each of these four steps is equally monotonous. At its best, a score adds complexity to the images before us. In “Joshua,” the music by Robert Amjarv and Bennett Barbakow might as well be a director on the set yelling at his actors: “More emotion! Less emotion! Be happier! Okay, not that happy. Now cry! That’s too much crying.” A traditional Hans Zimmer score would appear subtle next to what we’re given here.

By virtue of Joshua Wong’s existence, it’s difficult to criticize a portrait of him. What Wong has done (and is doing) is nothing short of a miracle. If this documentary serves as a bare-bones introduction to Wong, then it’s a success. There are alternatives in the form of magazine profiles, newspaper clippings and Youtube clips.

No matter the format, Wong’s story — and, in turn, the story of all fighting against a system hellbent on repressing its citizens — deserves to be heard. Just perhaps not like this.

Netflix In June: What's Coming and What to Watch Before It's Gone

Watch new additions “Moana” and “Orange Is The New Black” and stream “CSI: New York” before it leaves

The monthly round-up of what is coming and leaving Netflix has arrived. Here's what to look forward to and what you need to watch before it leaves.