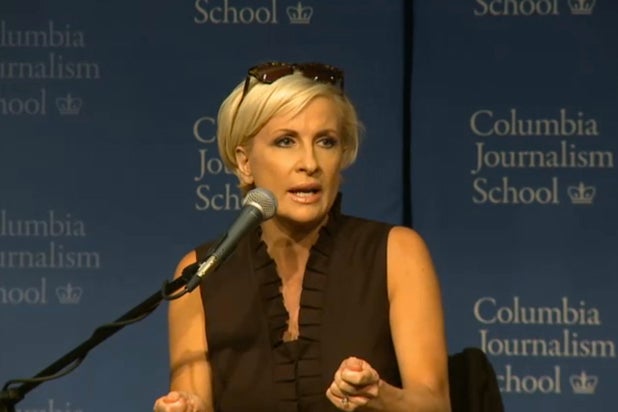 Columbia Journalism School’s Tuesday all-class lecture with “Morning Joe’s” Joe Scarborough and Mika Brzezinski turned out to be a big help for working journalists too, as Brzezinski called in a big favor for a CBS employee who said she was “languishing” at her job.

According to Capital New York, the unnamed woman spoke to Brzezinski after the talk, saying she wasn’t a student at the school but rather a professional journalist with CBS’ Newspath wire service who felt trapped in her current position, and wanted advice on how she could move up in her job.

Brzezinski whipped out her phone and called a CBS executive immediately and made an appointment for the woman to speak to him or her.

“I wasn’t expecting that,” the woman said afterwards.

As for Brzezinski, she didn’t seem to think what she’d done was a big deal. “That’s what women should do for each other, anyone should do for anyone!” she told Capital New York, adding: “And because I can.”

Brzezinski tweeted about the incident on Wednesday, saying “I don’t know why this is a story but thanks.”

So, if you are a struggling young journalist looking to advance your career: go to journalism school. Or just crash a few lectures.