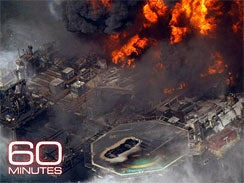 Last night’s "60 Minutes" report on the oil rig disaster in the Gulf of Mexico was some of the most compelling television journalism I’ve seen in a long, long time. (Watch the entire thing in two parts below.)

But according to Jason Leopold, the deputy managing editor of Truthout.org, CBS failed to credit him for part of the report — specifically, his April report about Ken Abbott, a former BP contractor and "whistleblower" in the "60 Minutes" piece. (Leopold did not name Abbott in April, but says CBS contacted him and he put the network and Abbott in touch.)

>> Thx 60mins 4 swiping my rpt & not crediting re: BP Atlantis after u contacted me & asked me 2 connect u w/whistleblower http://bit.ly/91NkUN

>> Story on BP whistleblower/Atlantis FIRST REPORTED BY ME that 60 mins swiped 2nite w/o credit after contacting me http://bit.ly/drbclC

>> That wouldn’t have happened if I worked 4 a MSM outfit. Getting credit 4 ur work when running in indy media circles helps build credibility

>> Here’s what you can do, 60 mins. Pay me six figures and I will be your gumshoe and then this crap won’t happen

To CBS’ credit, they eventually linked to Leopold’s piece online.

I’m not sure why it’s such a hassle to at least have mentioned that I wrote about him and the claims he leveled last month in a 2500 word story. They knew I did and we communicated about it. The way I see it, based on the communication, is that they wouldn’t have found the whistleblower if they didn’t read my report and reach out to me.

I link to people all the time if they were the first ones on a story. And if it’s a big investigative piece I also mention the news organization. It seems like a no brainer to me. What was upsetting is that they left their viewers with the impression that they broke the news about Atlantis. I didn’t name the whistleblower at his and his attorney’s request. But the things he said last night was what I had first reported.