One more warning sign of the crumbling field that is journalism: a once-sacrosanct   wall is coming down – the one between reporters and the people they cover in politics.

These days so many journalists are crossing over to join the pols — some of them crossing back again whenever the opportunity presents itself — that there are few signs the wall ever existed.

Think Linda Douglass, who left her post as congressional correspondent for ABC News last year to work for then presidential candidate Barack Obama and now is in line to serve as an assistant secretary of Health and Human Services. 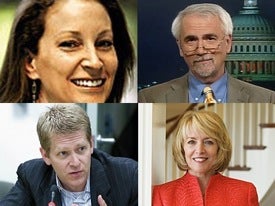 What’s changed, say those on either side of the crumbling wall, is a more politicized press corps that declares its partisan stripes as part of a branding campaign.

Some D.C journalists, like Hollywood reporters tempted to write their own screenplays, are drawn to the very politics they have always covered.

But perhaps more telling, the collapsing media landscape is sending more and more reporters out into the job market. “For the first time in 50 years, politicians have more job security than journalists,” said Robert Lichter, director of the Center for Media and Public Affairs at George Mason University. “It’s hard to fume at an act of desperation. Once upon a time journalists wanted to be eyewitnesses to history. Now journalism is becoming history.”

And many journalists insist that they are just bringing their skills of inquiry to a different part of the playing field. “This is a Democratic administration; we’re obviously on that side of the aisle, but I don’t see this as a partisan job at all,” said former Time bureau chief Carney.

Susan Molinari is a former congresswoman from New York who raised eyebrows when she left Congress to become a CBS news anchor before settling into her current role as political strategist at D.C.’s Bracewell & Giuliani.

“I’m not surprised,” she said of the recent spate of journalists entering politics. “For generations, journalists and politicians had a symbiotic relationship.”

A journalist who goes to work as a press secretary can understand journalists’ needs, but "when you become somebody’s press secretary, I no longer regard you as a journalist," he said. "You are working for a politician and in effect you are in public relations … when you finish that job, you can’t go back to being a journalist."

That doesn’t seem to be disturbing those in the Washington slipstream these days.

When the revolving door twirls the other way, politicos like Molinari often argue that the insights gained on the inside make them better journalists.

Diane Sawyer served as an aide in the Nixon White House before becoming a network star, first at CBS and now at ABC. Tim Russert was chief of staff to Sen Daniel Patrick Moynihan, the Democratic senator from New York, before being tapped to moderate NBC’s “Meet the Press.” And Chris Matthews, once a top aide to House Speaker “Tip” O’Neill, is now the powerhouse of MSNBC’s evening line-up.

"When you’re looking at politicians becoming journalists, it’s a very risky proposition," says Rosenberg. He cautioned against blurring lines "where the perception becomes the reality.

"We’ll look at these people and say, ‘So and so used to be a Congressman, how reliable can they be?… With someone like Karl Rove becoming a commentator for Fox, if you gave him the assignment of analyzing Democratic politics, you’re on shaky ground."

But the transition is not always without controversy. Conservatives recently launched a petition drive against ABC’s George Stephanopoulos after Politico.com reported that the former Clinton White House aide has participated in a daisy chain of phone calls with James Carville, Paul Begala and Rahm Emanuel — chief of staff in the Obama White House — most workdays for the last 17 years.

And Stephanopoulos’s pro-Hillary moderation of one of the Clinton-Obama debates also came under harsh criticism. "This is a clear conflict of interest… a clear violation of journalistic ethics," wrote L. Brent Bozell III, who runs a right-oriented watchdog group called Media Research Center, in a letter to ABC’s David Westin demanding that Stephanopouis recuse himself from coverage of the Obam administration.

ABC responded to Bozell that this call was not about policy advice, but merely Stephanopoulos checking in with friends and sources.

Regardless, in the age of left-wing blogs and right-wing radio, consumers seem to have grown cynical  about the notion of journalistic objectivity.

Or perhaps the age of objectivity is on its way out.

Lewis Wolfson, a retired communications professor at American University in D.C., was once a critic of the two-way traffic between journalism and politics. But these days even Wolfson, author of a study called “Through the Revolving Door: Blurring the Line Between the Press and Government,” sounds resigned to the new reality.

“It’s an issue that is lost in the mists of political and journalistic history,” he said. “It’s too bad in a way. It’s become so little relevant. There is just so much movement both ways.”