In a classic clash of extremes both far-left and far-right, MSNBC host Joy Reid sounded an ominous alarm about Marjorie Taylor Greene, calling the GOP Georgia Rep. “a clear and present danger” and the “present and future of the Republican Party.”

Reid didn’t seem eager at first to tackle Greene’s controversial views in her Tuesday night “ReidOut” segment (which begins after the 14-minute mark in the video below), but got good and wound up after gingerly broaching the subject.

“Marjorie Taylor Greene. I know, I know, I know,” Reid said. “But stay with me for a second, trust me. I don’t want to talk about her any more than you do. But here’s the thing: We have to. Because the frightening reality is that Margie-Q is the present and future of the Republican Party, period. And if we don’t talk about her, if we don’t address this clear and present danger … [she’ll] keep getting elected.”

Reid took particular issue with Greene’s attacks on Ketanji Brown Jackson, the all-but-confirmed Supreme Court nominee of President Joe Biden. Greene suggested in a tweet that senators who support the nomination of Jackson — who Republicans have criticized for supposedly lenient sentences she imposed on child pornography offenders — are themselves supporters of pedophiles. 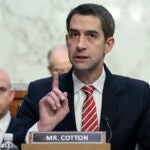 “It is a lie,” Reid said. “But they have no problem supporting fellow Republicans after learning of their actual exploitation of women and children,” she said, noting past and ongoing alleged sex scandals surrounding pols like Matt Gaetz (R-Florida) and Donald Trump (both have denied wrongdoing).

Reid also referenced Greene’s past associations with the Q-Anon conspiracy movement, which believes, among other things, that Democrats are secretly shielding vast child-sex rings. Greene has since disavowed the movement — though Reid pointed out the familiar ring of her latest statements.

“Calling non-pedophiles ‘pedophiles,’ all this talk about ‘groomers,'” Reid said, “is a duck call to Q[-Anon]. We may not have to listen to this twit, but … they are.”