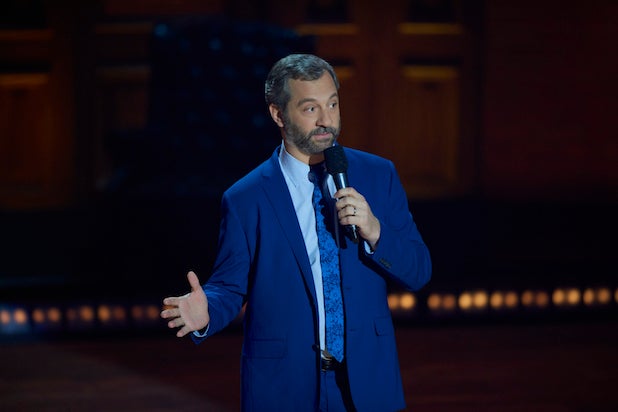 Judd Apatow was hesitant to return to stand-up, but his new Netflix special doesn’t hold back.

In the special, Apatow jokes about Bill Cosby trying to hide the newspaper from his wife so she can’t read the accusations against him, and in this post-Harvey Weinstein scandal world, the sketch is particularly resonant. Apatow thinks that way the Cosby scandal played out–it ended in a gridlocked jury and declared a mistrial–led people to have a stronger reaction to those who accused Weinstein and others.

During the Cosby trial, “the whole country said wait a second, why did we ignore [the women who came forward]?” Apatow told TheWrap in a recent interview. This paved the way for new silence breakers to be taken more seriously, he said. “These accusations are very serious, why don’t we stand with these people?”

“So then when the Trump Access Hollywood tape came out and then all of the accusations against Harvey Weinstein and Brett Ratner came out, people were more tuned into the fact that in the past they didn’t do anything to support these accusers,” he said.

“It’s been a slow evolution that probably started even before the Bill Cosby case,” he said, adding that there are “a lot of difficult conversations that we all need to have” to keep that evolution going.

But it can become difficult to have those conversations when a beloved public figure like Cosby, or even someone you know, is accused of misconduct. “It’s a new situation for people,” he said when asked about the backlash Lena Dunham received for defending Murray Miller, who wrote for HBO’s “Girls” that Apatow executive produced. Miller was accused by actress Aurora Perrineau of raping her in 2012. Dunham later issued an apology.

“I think what’s most important is you want people to feel heard, men and women,” Apatow said. “It’s important that when people come forward they feel like they will be respected, people will pay attention, people will investigate, and that it will not lead to their careers going down the drain because they made an accusation.”

But “we also need to get to the truth,” Apatow said. “And there’s another phase to this, which is trying to figure out what happened. And we do want the truth and justice to prevail in every case. And sometimes those answers are not very clear.”

Also Read: Netflix Says It's Really Not Creeping on You After It Trolled Users' Viewing Habits on Twitter

“Our community and every community needs to talk about how we are going to approach all of this,” he added. “Because we have never had that discussion before and hopefully that’s going to happen.”

One way Apatow approaches these social and political topics are, obviously, through his comedy. He hopes that comedy and political satire “influences people before they’ve decided if they’re democrats or republicans,” but he doesn’t think that the large swell of late night comedians turned social activists will be the deciding factor for voters.

“I think that people’s minds change when they realize they’ve lost their health insurance or coal mining jobs aren’t returning or generally that someone isn’t doing what they said they were going to do,” he said. “But it’s definitely an era where we’re seeing some of the best satirical comedy that’s ever been written.”

You can stream “Judd Apatow: The Return” now on Netflix.

Heads up: “It’s Always Sunny in Philadelphia” is leaving Dec. 9, so binge up

Well, Netflix aficionados: we've almost made it through an entire year of clicking "Play Next" and "Yes, I'm Still Here."  Here's what you definitely need to stream in December, along with titles you will want to re-watch before they're gone. For the full list, head over here.