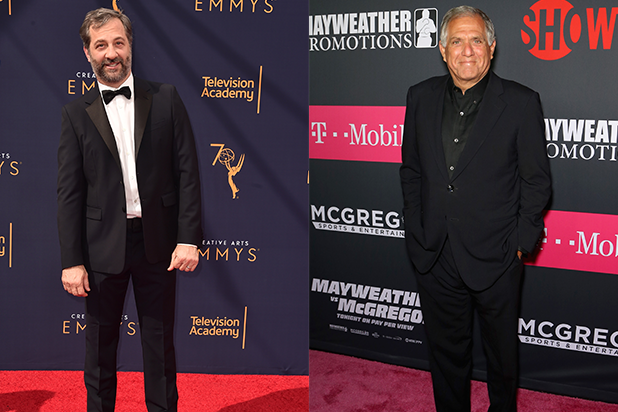 Judd Apatow is calling for Les Moonves to be put behind bars after more allegations of sexual assault against the former CBS exec were reported over the weekend.

“Les Moonves should be in prison,” Apatow said on Twitter Sunday night, quoting a tweet from reporter Yashar Ali that included a statement from Moonves denying the accusations against him and an announcement that he is stepping down as CBS’ CEO.

Also Read: Les Moonves Could Get Up to $120 Million in Severance, CBS Says in Filing

“This is so awful. Please take the time to read the details about what Les Moonves did,” Apatow tweeted. “Imagine what kind of monster sexually harasses and assaults his own doctor out of the blue at a check up. He should be listed as a sex offender and shouldn’t get a penny. All to charity.”

Sunday’s Farrow artcile is the second report of accusations against the former CBS CEO; Farrow’s first report was published in August.

Moonves, who had been helming CBS for 15 years, could receive as much as $120 million in severance.

In its 8-K filing with the Securities and Exchange Commission, CBS Corp. said it would place $120 million in a grantor trust, while an independent investigation looks into the allegations of sexual misconduct leveled against the now-former CBS chief. Two law firms Covington & Burling and Debevoise & Plimpton — were hired to investigate the accusations, as well as cultural issues at CBS News and “all levels of CBS.”

In a joint release with National Amusements, which controls roughly 80 percent of the voting power in CBS, the company said that Moonves will not receive a severance package “at this time,” and that he and CBS would donate $20 million to one or more organizations that support the #MeToo movement and equality for women in the workplace.

But on Monday, CBS laid out a pathway for how would handle any severance package for Moonves.

“In the event the Board determines that the Company is entitled to terminate Mr. Moonves’s employment for cause under his employment agreement and Mr. Moonves does not demand arbitration with respect to such determination, the assets of the grantor trust will be distributed to the Company and the Company will have no further obligations to Mr. Moonves,” the company said in the filing.

This is so awful. Please take the time to read the details about what Les Moonves did. Imagine what kind of monster sexually harasses and assaults his own doctor out of the blue at a check up. He should be listed as a sex offender and shouldn’t get a penny. All to charity. https://t.co/nTjqs6gWwM

Les Moonves should be in prison. https://t.co/QyfaqiRBmw