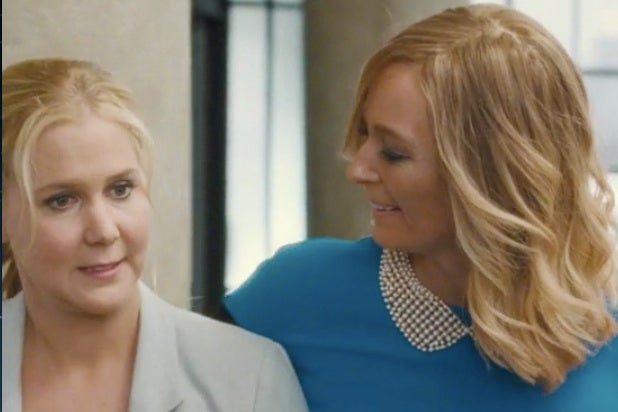 Apatow, who directed and produced the Universal Studios film, tweeted out the first look with a call to retweet.

The release of the trailer first on Twitter continues a growing trend of stars and studios turning to social media over traditional platforms to initially distribute content.  Universal Studios has been ahead of the curve in releasing trailers through Twitter; among the first studios to do so.

“With Amy and Judd and the rest of the cast being such savvy Twitter users, releasing the trailer right within a Tweet was a natural fit,” Rachel Dodes, Twitter’s Film Partnerships Chief, told TheWrap. “They knew they wanted to do something with Twitter to create a big moment around the launch of their first trailer, so we worked together to make it happen.”

Here it is!!Our trailer for #Trainwreck! Starring and written by @amyschumer. @TrainwreckMovie https://t.co/avXQnHtUNr. Retweet if you like

“Firstly because Twitter is an excellent place to have a conversation about a movie — so when a trailer is released on Twitter, it instantly becomes a topic of conversation,” Dodes continued.

“Twitter is also global and public, so Tweets can easily spread via retweets, or become embedded through the web, increasing their reach even further. With all the movie discussion happening each day on the platform, you could say Twitter is the world’s biggest movie theater.”

“Trainwreck” is scheduled to hit theaters this summer and Twitter told TheWrap users should expect to see more buzzed-about films’ first releases on its platform.

“With the release of the Trainwreck trailer on Twitter, the cast announcement of Ghostbusters happening in a Tweet just weeks ago, and more film stars who’ve joined in 2015 (like Melissa McCarthy and Robert Duvall), I think it’s a definitely a precursor of what’s to come on the platform this year.