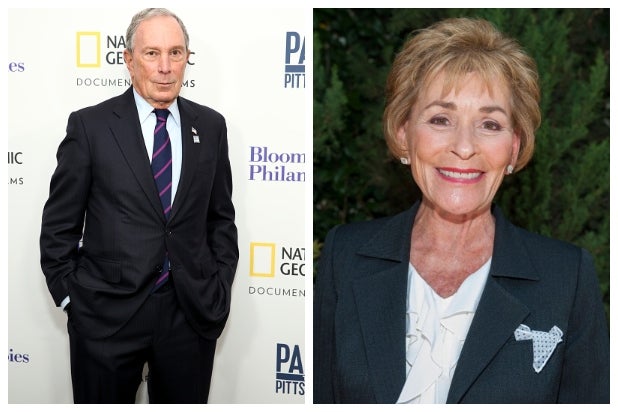 Judy Sheindelin, best known as Judge Judy, has endorsed former New York City Mayor Michael Bloomberg for president, despite the fact that he isn’t a candidate in the race.

In an op-ed published in USA Today on Wednesday, Sheindelin praised Bloomberg for being a “realist,” “man of the center,” and a “pragmatist.”

“Our American family has been fractured in recent years. We’re hopelessly divided, and a bitterly divided family cannot thrive. The only way we can begin to come together again,” Sheindelin wrote, “is if Michael Bloomberg, former mayor of New York City, becomes our next president.”

This is the first time that Sheindelin has publicly endorsed a political figure for office, which the judge acknowledged in her op-ed.

“I realize I am taking a personal and a career risk in making such a statement. I have carefully stayed away from politics for 50 years, except to vote. But times have changed in our country, and I believe the moment has come for me to step out from behind the curtain,” Sheindelin wrote. “I want to speak honestly and from the heart — regardless of the consequences.”

Though she noted that Bloomberg announced in March that he would not be running for president, Sheindelin said that the changing political landscape “has created an opportunity for Bloomberg, a man of the center, to change his mind.” According to people familiar with the matter who spoke with CNBC last week, the former mayor might actually be considering a presidential run if former Vice President Joe Biden drops out before or during the primaries.

“We need a no-nonsense president who’s sane, competent and honest, someone who can’t be bought and has no skin in the game,” Sheindelin wrote. “Most important, he’s the only person out there who seems to understand that screaming at one another gets us nowhere. After all the sound and fury we’ve experienced in the past three years, we need to tone down the rhetoric. Americans can no longer afford to let shrill voices drown out all the others in our society, because that would be a distortion of everything we stand for.”