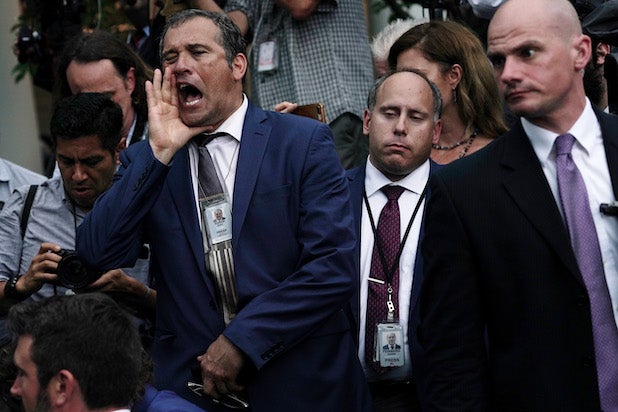 A federal judge ordered on Tuesday that the White House must reinstate the press pass of Playboy’s Brian Karem, whose credentials were suspended last month following an incident at the White House’s Rose Garden.

Two months ago, Karem and Sebastian Gorka, a conservative radio host and former Trump aide, had a heated argument during the White House’s Social Media Summit, which was an event geared toward conservative bloggers and commentators in support of Trump. After Karem attempted to get an interview with Trump, was ignored, and then was met with taunts by conservative media members, according to a lawsuit filed by Karem, the reporter attempted to “diffuse the situation with humor” and said, “This a group of people that are eager for demonic possession.” Upon hearing his remarks, the suit said,  Gorka said to Karem, “You are a punk! You’re not a journalist! You’re a punk!” while Karem responded with, “go home” and “get a job.”

In his decision on Tuesday, U.S. District Judge Rudolph Contreras granted Karem’s motion for a preliminary injunction and temporary restraining order, ordering that the White House must reinstate Karem’s press pass while his lawsuit — which argues that the suspension violated his due process and First Amendment rights — is still ongoing.

“Karem has, at this early stage of the proceedings, shown that he is likely to succeed on this due process claim, because the present record indicates that Grisham failed to provide fair notice of the fact that a hard pass could be suspended under these circumstances. Meanwhile, Karem has shown that even the temporary suspension of his pass inflicts irreparable harm on his First Amendment rights,” the judge’s opinion stated, explaining the decision to grant Karem relief.