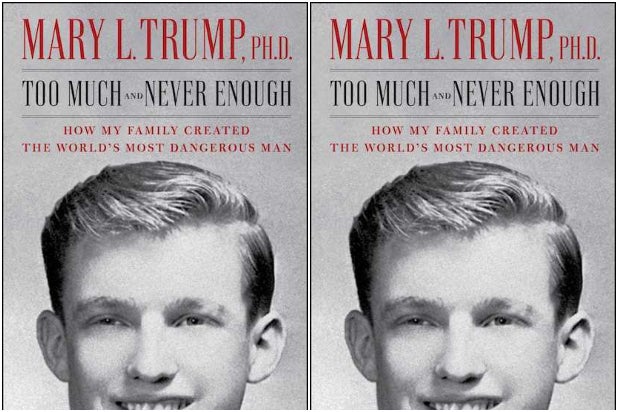 In an order filed on Tuesday, Justice Hal B. Greenwald said that Mary Trump and her publisher must appear before the court on July 10 and must not disseminate the contents of the book, “Too Much and Never Enough: How My Family Created the World’s Most Dangerous Man,” in the meantime. Mary Trump and Simon & Schuster are also temporarily barred from publishing “any descriptions or accounts of Mary L. Trump’s relationship with Robert S. Trump, Donald Trump, or Maryanne Trump Barry, or assisting any other person or entity in such publication, printing, or distribution, or providing such descriptions or accounts to any other person (other than counsel of record in this case),” the judge wrote.

In a statement sent to TheWrap, Robert Trump’s attorney, Charles Harder, said that his client was “very pleased” with the injunction. “The actions of Mary Trump and Simon & Schuster are truly reprehensible. We look forward to vigorously litigating this case, and will seek the maximum remedies available by law for the enormous damages caused by Mary Trump’s breach of contract and Simon & Schuster’s intentional interference with that contract,” Harder said. “Short of corrective action to immediately cease their egregious conduct, we will pursue this case to the very end.”

Also Read: Carl Reiner Said 2 Years Ago He Wanted to 'Stick Around' Until 2020 So He Could Vote Trump Out

But Mary Trump’s attorney, Theodore J. Boutrous Jr, has maintained that the restraining order is only temporary and that they will “immediately” appeal the decision. “It still is a prior restraint on core political speech that flatly violates the First Amendment,” he told TheWrap. “This book, which addresses matters of great public concern and importance about a sitting president in election year, should not be suppressed even for one day.”

A spokesperson for Simon & Schuster also said the publisher planned to appeal and expected to prevail due to “well-established precedents regarding prior restraint.”

According to a promotional summary of the book, Mary Trump will tell “in unsparing detail everything from her uncle Donald’s place in the family spotlight and Ivana’s penchant for regifting to her grandmother’s frequent injuries and illnesses and the appalling way Donald, Fred Trump’s favorite son, dismissed and derided him when he began to succumb to Alzheimer’s.” The book is scheduled for a July 28 release date.

The judge’s decision comes after Robert Trump and his attorney first sought a temporary injunction and restraining order against Mary Trump in a Queen’s County Surrogate Court on behalf of the estate of the late Fred Trump. Robert Trump’s argument was that by publishing her book, Mary Trump was violating a nondisclosure agreement she had signed when she settled with the estate. But last week, the judge denied the request, writing that the administration of the estate would not be impacted by the publication of the book and that the request was outside of the jurisdiction of the Surrogate Court.