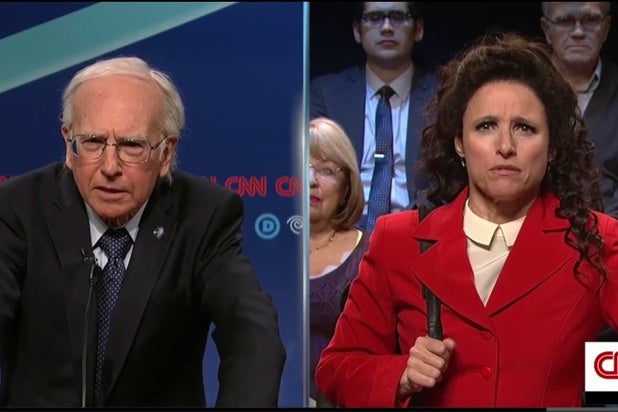 Julia Louis-Dreyfus brought former characters of many different spheres to this week’s “Saturday Night Live,” beginning with the very top of the show. In a cameo-rich episode, it was Louis-Dreyfus who dominated.

The show opened with the Democratic presidential debate in NYC. Kate McKinnon‘s Hillary Clinton squared off with Larry David‘s Bernie Sanders, both impersonations spot-on caricatures, as the debate devolved into Clinton rapping “The Fresh Prince of Bel-Air” theme and giving Sanders a noogie.

And then came a question from audience member and “longtime New Yorker” Elaine Benes, the character Louis-Dreyfus made famous on the show David co-created, “Seinfeld.” She yadda-yadda-yadda-ed with Sanders and asked Clinton how tough it was to be the only girl in a group of guys. We’ve seen a lot of cold open cameos this election season, but this appearance — combined with an encore of Vanessa Bayer‘s Rachel Green from “Friends” — brought a much needed levity to this segment.

Louis-Dreyfus, who started out on “SNL” as a cast member in 1982, began her monologue with clips of her as an extra during a vintage Martin Short sketch and clips from her movies such as “Troll” and “Soul Man.” The Emmy winner joked that she was surprised that it was only her third time hosting the show. She then summoned her “Veep” character, allowing Tony Hale to pop up for a well-timed cameo.

And then we saw the sketch you’ll be seeing in your social media feed for the next week: a commercial parody of a drug called Heroin A.M. that wasn’t side-splittingly hilarious, but it was just weird enough to make your friends watch, and the image of a gummy bear being melted down in a spoon is begging to go viral.

Also Read: Trump Supporter Upset After Being Mocked on 'SNL': 'Tears Have Been Shed' (Video)

The next sketch, a pre-filmed segment about Louis-Dreyfus having an affair with Pete Davidson’s overly affable pool boy, Chad, was funny enough. His repetition of the word “Okay” could justify making Chad a recurring character. And again, Nick Jonas turned in a memorable one-note cameo. (Still no acknowledgement of that botched guitar solo from last week, though!)

In the next sketch, Louis-Dreyfus played an actress from Hollywood’s golden age who hid her lines in various places on the set and recited them when she came across the object she had written them on. The sketch was fun and full of light laughs, but it felt like the sort of filler reserved for the last 10 minutes of the broadcast.

A commercial parody about a battery-operated Mercedes (that required 9,648 AA batteries to run) was so well-produced that it felt like a real commercial for the first few seconds. There’s also a good chance that this will give the Heroin A.M. spot a run for its money to be this week’s #SNLFeedFiller.

Nick Jonas‘ musical performance, which featured Tove Lo, might have been his weakest performance of the show. It’s not that it was bad (the leather jacket and the shirt tied around his waist combo wasn’t great), but it would be tough to top his strong performances in the sketches. (Also, still no acknowledgement of that guitar solo! Clear the air, Nick!)

The “Weekend Update” characters got better as the segment went on, with the pinnacle being Cecily Strong‘s title character in a movie called “Bagging Heather.” As a one-dimensional female character in a male-driven comedy, the scathing commentary was expertly written and flawlessly delivered.

Another highlight was Aidy Bryant’s Animal Annie character, a supposed expert on animals who shared animal facts and related them too closely to her own sad life: “Iguanas have two penises, but I wouldn’t know what to do with either of them, right, Daniel?!” Then she proceeded to bring out her new boyfriend, an iguana named Mr. Magic, decked out in a fedora. Kenan Thompson‘s Charles Barkley and Jay Pharoah‘s Shaq were funny, but nothing we haven’t seen before. Still, points for Thompson commenting on Pharoah’s eyes, “It’s like you’re having a staring contest with yourself.”

The “Who Works Here” game show sketch was surprisingly strong. Contestants looked at people in a CVS drugstore, and had to determine if they were employees or not. Also, it must have been hard to determine that Aidy Bryant dancing with toilet paper in the CVS was the most GIF-able snippet. Other close runner-ups included Bobby Moynihan as a male prostitute doing a cartwheel and Leslie Jones as the CVS manager, smiling and dancing in a smart business suit.

Nick Jonas‘ second song, “Champagne Problems,” was more lively than his first. But it still sounds like he’s trying to be somebody else, namely a combination of Justin Timberlake, Usher and The Weeknd.

McKinnon and Louis-Dreyfus paired together again for a sketch set at a Match.com Meet ‘n’ Match. As aliens named Woman Beth and The Barbara, it was a twist on the fish-out-of-water set-ups of The Coneheads and Wild and Crazy Guys. It was more creepy than LOL funny, with the stars’ otherworldly voices and black pupils. If this sketch aired in October, it could have been a hit Halloween costume for teenage girls everywhere.

The final sketch of the night, a pre-filmed preview of a film called “God Is a Boob Man,” featured Vanessa Bayer as a baker who just can’t bring herself to make a wedding cake for a gay couple. It was far too good to be relegated to this late in the show.