On Tuesday, the streamer released the look at the eight-episode show, which debuts later this month. In the nearly three-minute trailer, Lancashire’s Child is seen pioneering the way toward the modern cooking show. After proposing the show to a network, an executive says the idea “feels flimsy” and wonders if someone “a little more camera friendly” should get the gig.

While the men aren’t on board with her proposal, an initially defeated Child is bolstered by a woman working at the network who tells her that she’s “onto something so big.” So, she tries again. “One of the advantages of looking like me is that you learn from an early age not to take no for an answer,” she says.

And so, the Julia Child that America came to know is born as her show “The French Chef” begins to air. 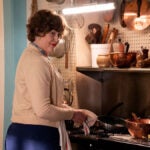 “Julia” is inspired by Julia Child’s extraordinary life and her long-running television series, “The French Chef,” which pioneered the modern cooking show. Through Julia’s life and her singular joie de vivre, the series explores a pivotal time in American history – the emergence of public television as a new social institution, feminism and the women’s movement, the nature of celebrity and America’s cultural evolution. At its heart, the series is a portrait of a loving marriage with a shifting power dynamic.

“Julia” is produced by Lionsgate and 3 Arts Entertainment. Chris Keyser (“The Society”) serves as showrunner, as well as executive producer alongside creator Daniel Goldfarb. Erwin Stoff (“Edge of Tomorrow”) of 3 Arts Entertainment, Kimberly Carver, Charles McDougall and Erica Lipez also executive produce. Todd Schulkin is a consulting producer on behalf of The Julia Child Foundation for Gastronomy and the Culinary Arts.

The show debuts March 31 on HBO Max with the first three episodes, followed by one new episode weekly.