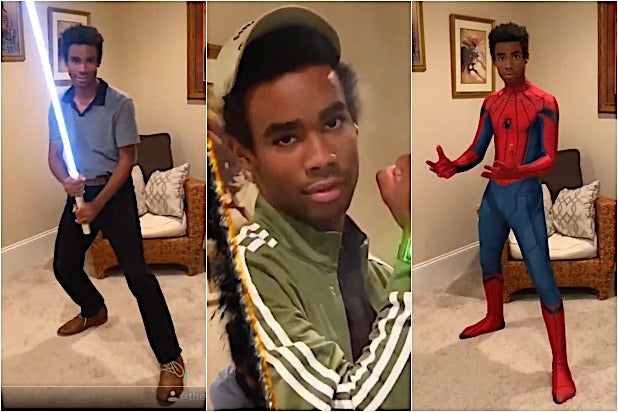 Our Spidey senses are tingling over theater student Julian Bass’ impressive TikTok video showing him transforming from Jedi to Ben 10 to Spider-Man himself… and a handful of industry giants are feelin’ the tingle, too.

The 20-year-old Georgia State University student posted a TikTok video — which you can see here — to twitter on July 2 that uses astounding visual effects and seamless transitions to give the illusion of transforming into his favorite superheroes. First, he appears as a Jedi wielding a lightsaber, which he uses to slice the screen and change into Ben 10 from the Cartoon Network franchise and then into Spider-Man, web and all.

In the caption, he urged fans, “If y’all can retweet this enough times that Disney calls, that’d be greatly appreciated.” Over 20 million views later, his wish came true, and a number of Hollywood bigwigs – including Walt Disney Company executive chairman Bob Iger, “Guardians of the Galaxy” filmmaker James Gunn and “BlackKklansman” executive producer Matthew A. Cherry – responded with praise.

By the end of the day, Iger had taken notice, tweeting at Bass, “The world’s gonna know your name!!!” to which Bass quickly replied, “This is the beginning!!!”

Gunn also replied to the twitter thread with a praising-hands emoji, which prompted “Scrubs” actor Zach Braff to respond, “Hire this man, Gunn!”

Cherry chimed in with an encouraging note, saying “Gonna me more than just Disney calling you. This is so dope.”

Bass was featured on “Good Morning America” Saturday and has since tweeted his thanks for the overwhelming response.

“I don’t think I properly thanked everyone for pulling through for me so THANK YOU!!! I see each and every one of you who believes in me and I PROMISE I will not let you down!!” he wrote.

Read the responses below.

The world’s gonna know your name!!!

This is the beginning!!!

Gunn posted an applause emoji, which Zach Braff replied to.

Gonna be more than just Disney calling you. This is so dope. https://t.co/XkhYVCURRs

While Sony replied with bulging eyes and surprised emojis, “GMA” took note that Bass had won over “some big-name fans.”

This student's visual effects catch the eyes of Hollywood. Julian Bass, the Georgia State University student behind the impressive effects, is winning over some big-name fans. @janai has more. https://t.co/IwSFfXObyy pic.twitter.com/ir9zfQWrRS