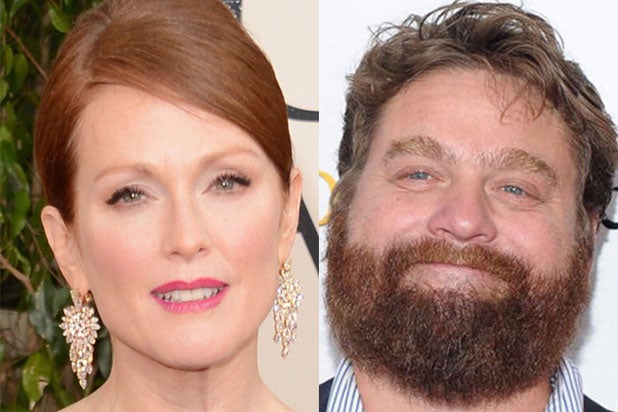 The long-gestating Ellen Page project “Freeheld” is finally coming together, as Julianne Moore is attached to play her lesbian lover in the indie drama, which will also star Zach Galifianakis, an individual familiar with the project has told TheWrap.

Laurel’s conservative partner, Detective Dane Wells, is shocked when he learns of Laurel’s orientation, but becomes the leader in the fight for gay rights. Based on the Oscar-winning 2007 documentary directed by Cynthia Wade, “Freeheld” is a universal story of civil rights, friendship and the courage to love.

Stacey Sher and Michael Shamberg will produce with Kelly Bush Novak of Vie Entertainment, Jim Stern of Endgame Entertainment, Jack Selby of Incognito Pictures and Wade. Production is expected to begin this summer.

Moore, who next stars opposite Liam Neeson in Universal’s “Non-Stop,” is currently filming her role as President Alma Coin in “The Hunger Games: Mockingjay – Part 2.” She recently wrapped David Cronenberg’s “Maps to the Stars” and is attached to star alongside Kristen Stewart in “Still Alice” and Greta Gerwig in “Maggie’s Plan.”

CAA reps both Moore and Galifianakis, who are respectively managed by Management 360 and Brillstein Entertainment Partners.