IMAX has hired Julie Fontaine, most recently a film publicity VP at Netflix, as its senior vice president of marketing, the company announced Thursday.

“Julie is a game-changing leader with exceptional versatility, having spearheaded successful marketing and publicity campaigns across theatrical and streaming, for blockbuster movies and award-winning prestige films,” Tu said. “As IMAX further expands its global content portfolio and diversifies its filmmaker partnerships, Julie’s expertise will help ensure that the IMAX Experience remains first-choice for our fans and partners alike.”

“IMAX is leading the way on how audiences experience entertainment. They are at the forefront of the evolution of film technology, enabling the world’s best storytellers to immerse us in the spectacular worlds they create,” Fontaine said. “I could not be more thrilled to join the incredible marketing team as they continue to find innovative and impactful ways to connect audiences to IMAX.”

Fontaine will oversee strategic marketing campaigns and creative for IMAX’s domestic and international blockbuster slate as well as product and marketing strategy across the IMAX theater network. In her role, she’ll work closely with the company’s studio, filmmaking, and exhibition partners.

Most recently, Julie Fontaine served as vice president of film publicity at Netflix, having built and led a team of more than 100 staff and was behind Netflix hits such as “Bird Box,” “Extraction” and “Roma.” 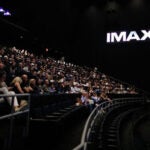 Prior to Netflix, Fontaine was EVP of worldwide publicity and marketing strategy at Lionsgate, where she oversaw a slate of films that included the “Hunger Games” and “John Wick” franchises, Tyler Perry’s films and “La La Land.” She began her career in New York with a six-year run at Miramax Films.

Fontaine served on the board of the New York Women’s Foundation for six years and is a currently member of the Academy of Motion Pictures Arts and Sciences, as well as Film Independent.