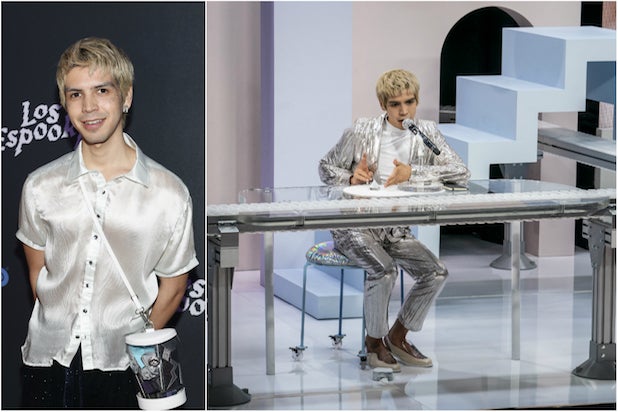 In an era where memes are being posted at lightning speed on social media, deadpan comedian Julio Torres wants to make you laugh at a cracked plexiglass square that he says is “having a bad day” in his upcoming prop-based special “My Favorite Shapes.” Will we have the attention span for it? Maybe, Torres tells TheWrap. Does that mean quickly-digested internet memes and video-sharing platforms like TikTok are ruining the future of comedy? Torres says not so fast.

“I think comedy will be different — I don’t think it will be any better or worse,” Torres told TheWrap regarding the future of comedy in the social media era. “It feels like the brain is wired differently, but it’s not any less funny.”

“My Favorite Shapes” debuts this Saturday and features Torres — who plays Andrés, adopted heir to a chocolate fortune in HBO’s “Los Espookys” — going through a conveyer belt of lifeless objects. Torres holds up shapes and crafty figurines like squares, a tiny cactus or a mini  airplane curtain, bringing them to life by comedically analyzing their potentially human qualities.

“To be a curtain, and pick that as your curtain job, it’s like, who hurt you?” he said, holding up a diorama of an airplane cabin with a curtain that divides first class from economy during a set on The Tonight Show with Jimmy Fallon.

Torres has been touring with his shapes for a while now. “My Favorite Shapes” was taped in front of a live audience at Brooklyn’s Elsewhere after Torres toured the set in cities like Philadelphia and L.A. Torres said “My Favorite Shapes” harkens back to a time when Torres was a kid growing up in El Salvador playing make-believe, when he could let his mind run wild.

“Adolescence was the darkest time for me. It was a time when I stopped playing,” he said.

Also Read: How the Washington Post Became a Must-Follow on Teen App TikTok

Today, once popular toy stores like Toys R’ Us are closing down, and the rise of mobile entertainment may be the reason why. According to the Pew Research Center in 2015, eight in ten parents say their kids 6 to 17  play electronic games. Nearly 50 percent of kids in the U.S. zero to eight had mobile phones in 2017, according to Common Sense Media.

But Torres isn’t concerned that the new generation of comedians coming out of platforms like TikTok, a popular app where you can upload bit-sized video set to music, will effect comedy negatively. He said “you could make the argument that I was playing with toys made by corporations,” similar to how we now play videos and games made by app developers and creators.

“I see up-and-coming, established younger stand-up comedians who are internet driven and above and beyond my connection to the internet,” Torres said.

Also Read: Does 'Hobbs & Shaw' Have a Post-Credits Scene?

The idea to make his first comedy special involving props came from his joy in “making something beautiful.” In the writing process, Torres went back to his playing days, setting objects like a cactus and a Ferrero Rocher chocolate on a table. He then analyzed what the object should represent, and what part of the show it should be in an exercise of trail and error.

Torres said he doesn’t see himself sitting behind a conveyer belt in his entire stand-up career, but he’ll continue exploring how to use visuals to bring the best out of his style of comedy.

“I’m really drawn to comedians who are very apologetic about who they are and what they do. Someone who stays true to who they are and their sense of self,” Torres said. “I find joy in creating something beautiful.”

“My Favorite Shapes” was directed by Dave McCary (“Saturday Night Live”). It is produced by A24, and executive produced by Torres’ SNL boss Lorne Michaels and his Los Espookys collaborator Fred Armisen.

How does Dwayne Johnson and Jason Statham’s new spinoff “Hobbs & Shaw” stack up to the previous entries in the franchise?