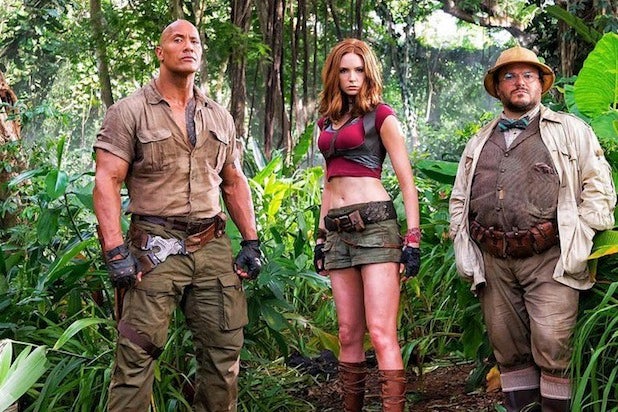 “Jumanji: Welcome to the Jungle” screened for the first time on Sunday night, and early reactions are in — fans are raving about how fun the film the film is, and are praising the performances of the actors in the upcoming movie.

Collider’s John Steven Rocha raved about the “chemistry gold” of stars Dwayne Johnson, Karen Gillan, Kevin Hart and Jack Black. “The body swapping stuff totally works, the action scenes are well done and it’s got a great BIG heart at the center of it. Highly recommend it,” he added.

“Jumanji: Welcome to the Jungle” follows about four misbehaving students who are transported into a video game. There, they take on alter-ego avatars, played by Johnson, Hart, Karen Gillan and Black — and some are in for a surprise.

Directed by Jake Kasdan, the screenplay was written by Chris McKenna & Erik Sommers and Scott Rosenberg & Jeff Pinkner with a story by Chris McKenna, based on the book “Jumanji” by Chris Van Allsburg. Matt Tolmach and William Teitler are producers.

See Video: The Rock Shares a Life-Threatening Experience With a Selfie-Seeking Fan

See the first reactions to the movie below.

I can now say that the biggest surprise of the holiday season is #Jumanji. It's super entertaining & very funny w/ terrific cast chemistry (especially b/t @TheRock & @KevinHart4real). Video game fans will dig it even more. See it w/ the whole family pic.twitter.com/e6FOPwjsB5

#Jumanji was a ton of fun. Great nods to the original. Jack Black steals it. @TheRock and @KevinHart4real need to keep working together.

And YO I love @karengillan!

Saw @jumanjimovie last night and it is A LOT of fun! @TheRock @karengillan @KevinHart4real and #JackBlack are chemistry gold. The body swapping stuff totally works, the action scenes are well done and it’s got a great BIG heart at the center of it. Highly recommend it. #Jumanji pic.twitter.com/OmXkc1I24o

My only real issue with the new #Jumanji is that there's not nearly enough @missipyle. pic.twitter.com/TjYUjJKfl5

Now that the social embargo for Jumanji: Welcome to the Jungle is up, I will say that Jack Black's performance is perfection personified and deserves 12 Oscars. pic.twitter.com/4wu3Q4wYIB

Was expecting the worst but have to admit the new #JUMANJI movie is a lot of fun. I’d even say it is one of the best “video game movies” ever made, maybe under only King of Kong, Scott Pilgrim, Edge of Tomorrow & Wreck It Ralph (none of which are adaptations).

Saw #Jumanji! It's light on nostalgia (besides a handful of Easter eggs), but a lot of fun. The body swap stuff is SO good. Could watch Jack Black play a teenage girl stuck in Jack Black's body, or @TheRock newly discover his muscles, forever. #WelcomeToTheJungle pic.twitter.com/yRIoQsWASV

got to see #Jumanji and it is fun as heck! @TheRock totally steals the show, but everyone gets a chance to shine.

Hey, about that new #Jumanji: It's fun! It's the kind of family-friendly outing that should help settle a lot of debates this holiday season. Jack Black is very, very funny, and I kinda love how they attempt to make it a true sequel to the original with some wonky engineering.