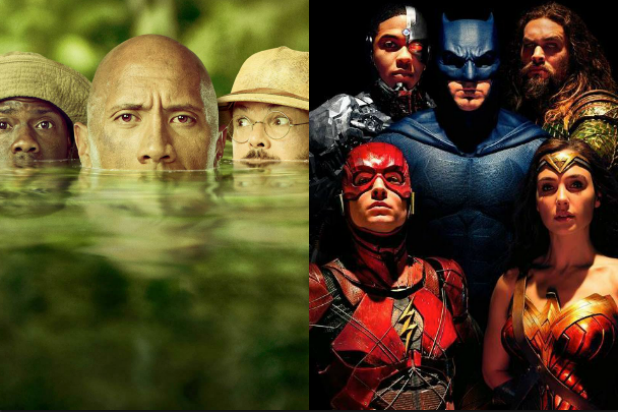 Though it is now completing its fourth weekend in theaters, Sony’s “Jumanji: Welcome to the Jungle” is performing like a film in its second weekend — with an estimated $35.4 million on Martin Luther King weekend; and on Sunday, the film reached $666 million worldwide, passing the $654 million total made by “Justice League.” But that’s not the only major franchise film that Dwayne “The Rock” Johnson’s latest action film is outperforming.

“Jumanji” was able to pass the DC superhero mashup thanks in part to a strong $40 million opening in China this past weekend. The adrenaline-filled but comical tone of the movie, about four teens trapped in a video game, resonated more with Chinese audiences than “Star Wars: The Last Jedi,” which only opened to $28 million and has already had its Chinese total eclipsed by “Jumanji” with just $38.8 million, well below the totals to this point for “The Force Awakens” and “Rogue One” in the East Asia nation.

While “Star Wars” will be just fine with a 2017-best $1.27 billion global gross and a current spot in the top 10 highest grossing films of all time, it shows how China’s taste in movies can differ from the rest of the world.

If “Jumanji” continues to show legs in the U.S. and China, there are several major franchise films it could soon top. It is currently ranked eighth on the domestic charts for 2017, and is expected to pass the $313 million made by “Thor: Ragnarok” and is also on pace to pass the $327 million made by “It.” On Sony’s studio charts, it will also pass the $304 million made by the 2012 James Bond film “Skyfall,” which would make “Jumanji” the highest domestic-grossing film for Sony outside of the “Spider-Man” franchise.

Globally, “Jumanji” currently sits 12th among 2017 releases and needs to reach $794 million to pass “Pirates of the Caribbean: Dead Men Tell No Tales” and crack the top 10 spot. Stateside, the film’s next test will be whether it can keep family audiences coming in as kids head back to school. It’s expected to remain in the No. 1 spot for the next two weeks, as this coming weekend’s new releases, “12 Strong” and “Den of Thieves,” aren’t expected to gross more than $20 million.

After that, “Jumanji”‘s core demographic is expected to split off when “Maze Runner: The Death Cure” opens on Jan. 26. In China, “Jumanji” will go up against the animated film “Ferdinand” and the inspirational family tale “Wonder” next weekend, followed by “Maze Runner” the week after.