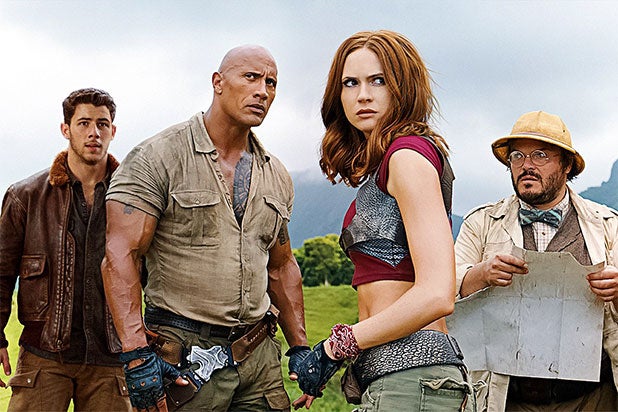 “Jumanji: Welcome to the Jungle” earned a solid $7.2 million on its opening day Wednesday, on track for its $45 million six-day opening.

Meanwhile, Fox’s “The Greatest Showman” grossed $2.45 million on Wednesday. It’s projected to have a six-day opening in the low-to-mid $20 million range against an $84 million budget.

Made on a budget of $90 million, “Jumanji” will try to peel off some family audiences and the 18-35 demographic with its quartet of box office drawing stars: Dwayne Johnson, Kevin Hart, Jack Black and Karen Gillan. The film also has critics on its side, currently giving it an 77 percent “fresh” rating on Rotten Tomatoes. The film’s CinemaScore is A-.

Directed by Jake Kasdan and based on the 1995 Robin Williams adventure film, “Jumanji: Welcome to the Jungle” follows four teens who wind up in detention and find a mysterious video game, which is actually the Jumanji board game from the first film transformed into a video game cartridge. When they play it, they get sucked inside the game and are transformed into their game avatars. With the help of another player who fell into the game 20 years ago (Nick Jonas), the quartet must find a way to escape. The film was written by Chris McKenna, Erik Sommers, Scott Rosenberg, and Jeff Pinkner.

“The Greatest Showman” is directed by Michael Gracey from a script by Jenny Bicks and Bill Condon with songs written by “La La Land” lyricists Benj Pasek and Justin Paul. Hugh Jackman, Zac Efron, Zendaya, Rebecca Ferguson and Michelle Williams star. The film has been nominated for three Golden Globes, including Best Musical or Comedy, Best Original Song, and Best Actor for Jackman.

“The Greatest Showman,” a musical based on the life of famed circus founder P.T. Barnum, has received mixed reviews. On Rotten Tomatoes, the film holds a score of 48 percent. However, it has received a CinemaScore of A.

“Star Wars: The Last Jedi” is expected to continue its winning streak in its second weekend at the box office, looking to exceed another $100 million. On Wednesday, the Rian Johnson-directed film grossed another $16.9 million. So far, “The Last Jedi” has earned $278.8 million domestically, and $573.8 million globally.

In addition to these wide releases, Fox Searchlight’s “The Shape of Water” and Focus Features’ “Darkest Hour” will expand nationwide while other awards contenders like Fox’s “The Post,” Sony’s “All The Money In The World,” STX’s “Molly’s Game,” and Focus’ “The Phantom Thread” will also make their entrance.