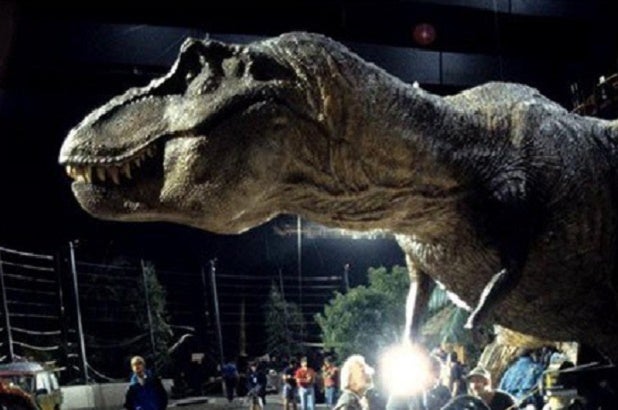 The shock waves from the stunning $550 million global debut of “Jurassic World” are rumbling all the way to Wall Street.

Shares in Comcast, parent company of Universal Pictures, the studio behind the sequel to Steven Spielberg‘s 1993 sci-fi classic, rose for the second straight day and closed up 54 cents Tuesday to $58.88. Ultimately, the success of “Jurassic World” will add billions of dollars to Comcast’s bottom line, according to analysts.

“There’s every reason to think that ‘Jurassic World’ will be just as big a hit on pay-per-view and downloading and DVD as it was in theaters,” Seth Willenson, an entertainment analyst specializing in library valuations, told TheWrap. “And this is sure to create new revenues from merchandise, licensing and TV sales, and refresh its theme parks, too.”

Blockbuster movies don’t typically move the needle for media conglomerates like Comcast, but “Jurassic World” will. It’s a change-up, because NBCUniversal hasn’t been a revenue driver for Comcast, which has seen its stock gain 11 percent over the past 12 months.

With NBC’s ratings down, the unit’s revenues were off 4 percent in the quarter that ended March 31, to $6.6 billion. Comcast’s broadband and pay-TV services are typically stronger, and in that quarter NBCUniversal sales made up 37 percent of Comcast’s revenue, but 29 percent of its profits.

Like Disney, Comcast is diversified enough to capitalize on the theatrical success of the dynamic dinos.

In addition to increasing home entertainment revenues, the company will benefit from selling TV rights to the non-Comcast cable channel FX on Monday. Merchandise sales will provide another revenue source, particularly a deal with Hasbro that seems poised to reverse a decade of cooling sales for dinosaur-themed toys.

And the “Jurassic World” bonanza should heighten interest in dinosaur rides and exhibits at Universal’s theme parks in Hollywood, Orlando, Florida, and Osaka, Japan.

The success of “Jurassic World” also vindicates the strategy of Comcast chairman and chief executive Brian Roberts, who roughly two years ago ordered an overhaul at Universal, replacing then studio chief Adam Fogelson with Jeff Shell, the former head of Comcast’s foreign operations.

“That’s looking like a pretty smart move right now,” said Willenson, “and that going to build confidence as well.”

The studio’s fortunes began to turn around last year, and that success has continued in 2015. The hot car sequel “Furious 7” has taken in $1.51 billion at the box office globally, spurred an “F&F 8” and is about to overtake “The Avengers” as the third-highest grossing movie all time, behind only “Avatar” and “Titanic.”

The musical comedy “Pitch Perfect 2” has taken in $260 million and a second sequel was announced Monday. And “Fifty Shades of Grey” has taken in $570 million since opening in February and two more films are scheduled.

Analysts say next week’s “Ted 2” is on target for a $60 million opening and “Minions,” an animated spinoff from “Despicable Me” that launches next month, could be the studio’s third movie this year to hit $1 billion in worldwide grosses.

That’s a lot of successful sequels, and one area in which “Jurassic World” is a little different.

The film’s storyline offers no obvious direction for a follow-up, there’s no script and Universal insiders insist their focus is on overseeing its rollout. The studio is typically deliberate in announcing sequels. It only announced plans for a third “Pitch Perfect” movie on Monday, a month after the second film broke out at the box office.

“Jurasssic World” director, Colin Trevorrow has said in interviews that he’s not interested in a second film, and though star Chris Pratt has been quoted saying that he’s contractually set for a sequel, expect a costly renegotiation given the film’s opening and Pratt’s newfound status as a sure-fire box office draw.

The bottom line is that a sequel to a franchise film that just posted the biggest box-office opening in history is all but inevitable. And that, like all the peripheral revenues generated “Jurassic World,” you can take to the bank.