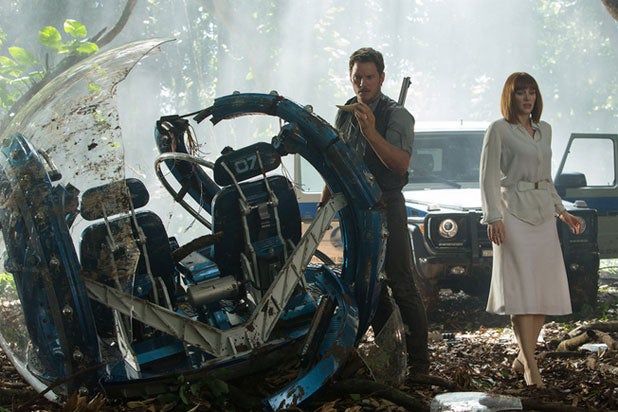 Universal Pictures’ presentation at the annual CinemaCon convention in Las Vegas was a hit with exhibitors, judging from excited discussion among movie exhibitors afterwards.

Universal opened by trumpeting the billion-dollar gross of “Furious 7” and closed with the rip-roaring extended trailer for “Jurassic World,” which pits Chris Pratt against a new dinosaur even more ferocious than the T-Rex of “Jurassic Park.” This new predator isn’t just killing for food — it’s killing for sport. The film may be too intense and scary for young children, but everyone else will likely be on the edge of their seats as director Colin Trevorrow conjures the magic of Steven Spielberg‘s original.

Chris Meledandri introduced Universal and Illumination’s “Minions,” which is expected to be the biggest animated movie of the summer. The footage explored the history of the Minions and introduced us to three of the little yellow guys, as well as the villainous Scarlet Overkill, voiced by Sandra Bullock. Jon Hamm and Michael Keaton are also part of the vocal ensemble.

Meledandri then introduced Illumination’s 2016 animated movie “The Secret Life of Pets,” which features an all-star voice cast including Louis C.K., Kevin Hart, Eric Stonestreet, Jenny Slate, Dana Carvey and Albert Brooks. We saw glimpses of what happens when humans leave their pets at home for the day, including a fat cat with no appetite for feline food and a hoity-toity dog that likes heavy metal.

F. Gary Gray brought out rap legends Ice Cube and Dr. Dre to introduce “Straight Outta Compton,” which looks dynamite. The film could prove to be a surprise awards contender along with Baltasar Kormakur’s “Everest,” which boasts an excellent ensemble including Josh Brolin, Jake Gyllenhaal, Jason Clarke and John Hawkes. Based on a true story, “Everest” looked like an emotional survival story that will appeal to adults and like-minded thrill seekers.

Universal showed off a handful of comedies — “Ted 2,” “Trainwreck” and “Sisters” — all of which look very funny. Seth MacFarlane introduced the “Ted” sequel, saying he was glad to have Mark Wahlberg and Amanda Seyfried back. Of course, Seyfried wasn’t in the first film, an oversight that MacFarlane joked was a result of drinking too much. She plays a pot-smoking lawyer who helps Ted conceive with his bride Tami-Lynn. New England Patriots quarterback Tom Brady has a cameo in the movie, which should boost ticket sales throughout Wahlberg’s hometown of Boston.

Amy Schumer followed and teased MacFarlane for a “Paul Blart” joke that fell flat before introducing an extended trailer for Judd Apatow’s “Trainwreck.” John Cena co-stars in the film as one of Schumer’s serial lovers before she meets a get-serious doctor played by Bill Hader. LeBron James co-stars as one of Hader’s patients who also gives him romantic advice, while Colin Quinn plays Schumer’s monogamy-averse father.

Cena popped up again in the trailer for Jason Moore’s “Sisters,” which finds real-life BFFs Tina Fey and Amy Poehler playing siblings who don’t seem to have grown up. With their parents selling their childhood home, they decide to throw a party, which means calling a drug dealer (Cena) to liven up the festivities.

Universal also flew in Guillermo del Toro to introduce Legendary’s “Crimson Peak,” a gothic horror film that surrounds stars Mia Wasikowska, Tom Hiddleston, Jessica Chastain and Charlie Hunnam with practical effects. The film should scare up decent box office amongst the genre crowd, which seemed less impressed with M. Night Shyamalan’s “The Visit.” The film didn’t cost much, so it won’t need to gross $1 billion like “Furious 7” to turn a profit, but judging from the first trailer, Shyamalan’s comeback remains on hold. With no stars, it represents a significant marketing challenge, but having said that, production company Blumhouse is full of surprises and deserves the benefit of the doubt.

On the news side, Universal’s Donna Langley unveiled release dates for “Fifty Shades Darker” and “Fifty Shades Freed,” though she let Vin Diesel handle the release date honors for the next “Fast and Furious” movie. The “Fifty Shades” sequels will hit theaters on Feb. 10, 2017 and Feb. 9, 2018, while “Furious 8” (not the actual title) will pull ride or die on April 14, 2017.