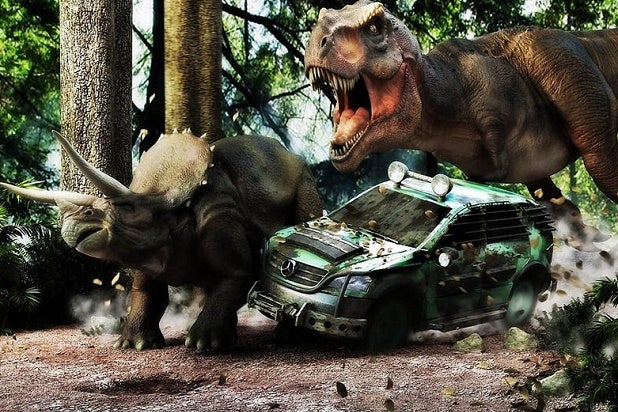 “Jurassic World” thundered to its second straight triumph at the North American box office this weekend, beating back a major challenge from Pixar Animation’s “Inside Out” with a rally that lifted the dinosaurs to a $102 million win.

The sequel to Steven Spielberg‘s 1993 sci-fi classic is rampaging toward $1 billion in global grosses — it’s currently at $981 million — faster than any movie ever has. But the Father’s Day weekend victory over the Disney family film didn’t come easily. The stunning $91 million debut by “Inside Out,” which led after Friday and outpaced projections by roughly $25 million, was the best ever by a movie that didn’t open in the top spot.

“Jurassic World” delivered a powerful $39.3 million on Saturday which drove it past “Inside Out” — which had led after Friday and took in around $31 million Saturday — but left “Jurassic” just under the second-weekend record of $103.1 million set by “The Avengers” in 2012.

The domestic total is now $381 million for the sci-fi saga directed by Colin Trevorrow and starring Chris Pratt and Bryce Dallas Howard. “Jurassic World” should top $1 billion in global grosses on Sunday or Monday, its 11th and 12th days in release, which would make it the fastest a movie has ever reached the milestone. The current record-holder is another Universal blockbuster, “Furious 7,” which did it in 17 days in April.

Overseas, “Jurassic World” stayed at No. 1 and rolled to $160 million over the weekend, the best holdover total for a day-and-date release ever, and its total from abroad is now $583 million. It took in $22.1 million from IMAX theaters worldwide, and its worldwide total on the giant screens is now $84 million. The dinos shattered yet another record by topping $80 million on IMAX in 12 days, faster than the 23 days it took “Avatar.”

“Inside Out,” which has terrific reviews and received an “A” CinemaScore from moviegoers, couldn’t quite confound the experts who predicted it would be the first of 15 Pixar movies not to open at No. 1, but no one at Pixar or Disney was disappointed with the debut.

Also Watch: Top 10 Pixar Movies Quotes, From 'Toy Story' to 'Inside Out' (Video)

“Inside Out” is set in a young girl’s mind, where five emotions — joy, anger, fear, disgust and sadness — battle it out. Amy Poehler, Bill Hader, Mindy Kaling, Phyllis Smith and Lewis Black top the voice cast. The idea came from Pete Docter, who co-directs along with Ronaldo Del Carmen and producer Jonas Rivera. The production budget was $175 million, so the stakes were high.

“ is always saying that quality is the best business plan, and that’s been a cornerstone to their consistent success over the years,” he said.” That’s why (Disney CEO) Robert Iger brought them into the fold, and this weekend certainly bears out that confidence. ” Disney acquired Pixar in 2006.

The “Inside Out” audience skewed female at 56 percent, very family-oriented at 71 percent, and at 38 percent the 12-and-under crowd was the biggest.

Hollis credited Disney’s marketers for successfully handling a kids film with a high concept and some sophisticated sensibilities very well.

“It was the ability to attract both the youngest and the oldest moviegoers, without alienating either group, that enabled us to reach the heights that it did,” he said.

Regardless of who prevailed between the dinos and the Disney film, the overall box office was going to be a winner with the top two movies taking in nearly $200 million on their own. The weekend was a massive 70 percent over the comparable weekend last year, and keeps 2015 on track to the biggest year at the domestic box office in history.

The weekend’s other wide opener, the Sundance hit “Dope,” brought in $6 million and fifth place for Open Road Films. That’s at the low end of expectations for the comedy-drama about an inner-city teen (Shameik Moore) trying to get into college. The film is written and directed by Rick Famuyiwa.