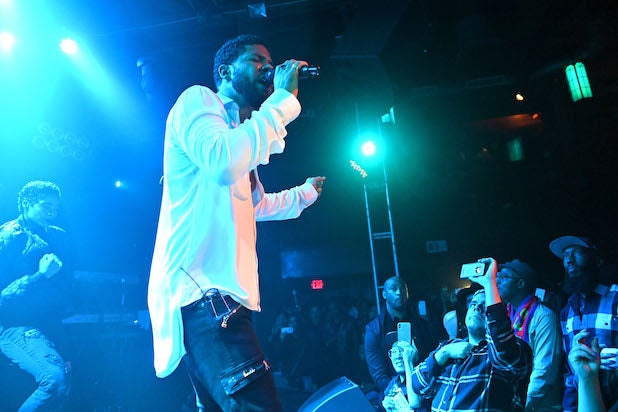 “Empire” star Jussie Smollett returned to the stage at West Hollywood’s Troubadour club on Saturday night — his first performance since surviving what police called a “possible racially motivated” attack in Chicago on Jan. 28.

“I’m not fully healed yet but I’m going to and I’m going to stand strong with y’all. I had to be here tonight,” Smollett, choking back tears, told the audience. “I couldn’t let those motherf—ers win!”

Police said Smollett was walking when two offenders started yelling the racist and homophobic slurs. The offenders then “began to batter the victim with their hands about the face and poured an unknown chemical substance on the victim,” and one put a rope around his neck, according to police. Smollett later told detectives his attackers yelled about “MAGA,” referring to President Trump’s “Make America Great Again” slogan.

Also Read: Jussie Smollett Speaks Out for First Time Since Attack: 'I Still Believe That Justice Will Be Served'

Towards the end of his set Saturday, Smollett said that he had suffered bruises, but his ribs were not cracked or broken, adding that he was not hospitalized and that both his doctors in L.A. and Chicago “cleared” him to perform.

This wasn’t the first time Smollett addressed the incident. Earlier this week, the actor spoke out about speculation that he had changed his initial account o the attack.

“I am working with authorities and have been 100 percent factual and consistent on every level,” he said. “Despite my frustrations and deep concern with certain inaccuracies and misrepresentations that have been spread, I still believe that justice will be served.”

“Jussie has told the police everything from the very beginning,” the statement read. “His story has never changed, and we are hopeful they will find these men and bring them to justice.”

Chicago police released phots last week of “potential persons of interest” in the attack which showed two silhouettes walking in the area of where Smollett was sometime between 1:30 a.m. and 1:45 a.m., but does not show the actual attack.

#JussieSmollett takes the stage at the Troubadour. He gets emotional, saying he’s “not fully healed” but he will be. pic.twitter.com/OZ3LZqKeRQ