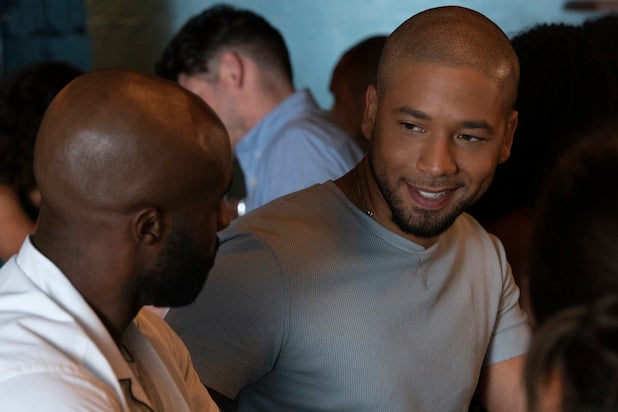 Jussie Smollett has been removed from the final two episodes of “Empire” Season 5, following his arrest on the charges of filing a false police report, the Fox hip-hop drama’s executive producers announced Friday.

“The events of the past few weeks have been incredibly emotional for all of us,” read a statement from “Empire” co-creators Lee Daniels and Danny Strong, showrunner Brett Mahoney, and executive producers Brian Grazer, Sanaa Hamri, Francie Calfo and Dennis Hammer.

“Jussie has been an important member of our ‘Empire’ family for the past five years and we care about him deeply,” the statement continued. “While these allegations are very disturbing, we are placing our trust in the legal system as the process plays out. We are also aware of the effects of this process on the cast and crew members who work on our show and to avoid further disruption on set, we have decided to remove the role of ‘Jamal’ from the final two episodes of the season.”

Representatives for Smollett did not immediately respond to TheWrap’s request for comment on the actor being dropped from the remainder of “Empire’s” fifth season.

The decision to remove Smollett from the remaining episodes of Season 5 comes after “Empire” studio 20th Century Fox stated Thursday morning it was “considering [its] options” on the actor’s situation “We understand the seriousness of this matter and we respect the legal process. We are evaluating the situation and we are considering our options.” A day earlier, the studio had renewed its support for the actor, saying, “Jussie Smollett continues to be a consummate professional on set and as we have previously stated, he is not being written out of the show.”

As TheWrap previously reported, Smollett’s role had already been cut down on the remaining episodes of “Empire” Season 5. An individual close to Smollett told TheWrap on Thursday that, at that time, the actor still planned to be on set throughout the week, but cautioned that plans could change quickly amid his ongoing legal issues.

During a press conference Thursday morning, shortly after Smollett’s surrender, Chicago PD Superintendent Eddie Johnson said that Smollett staged an attack on himself because he was “dissatisfied with his salary.” Smollett was making around $125,000 per episode on “Empire,” an individual with knowledge told TheWrap, who added there had previously been no salary dispute between Smollett and the studio and that he had never even approached them about a raise.

Smollett — who plays the openly gay Jamal Lyon on the series — surrendered himself to Chicago PD early Thursday morning, hours after he was formally charged with filing a false police report. He was released from police custody later that afternoon, after posting bail and surrendering his passport following a bond hearing in front of State of Illinois Circuit Court of Cook County Judge John Fitzgerald Lyke Jr.

Smollett’s team put out this statement Thursday, after the actor was released from custody: “Today we witnessed an organized law enforcement spectacle that has no place in the American legal system. The presumption of innocence, a bedrock in the search for justice, was trampled upon at the expense of Mr. Smollett and notably, on the eve of a Mayoral election. Mr. Smollett is a young man of impeccable character and integrity who fiercely and solemnly maintains his innocence and feels betrayed by a system that apparently wants to skip due process and proceed directly to sentencing.”

The criminal case against Smollett stems from a report he filed on Jan. 29 that he was attacked by two men who shouted racial and homophobic slurs and referenced “MAGA.” After releasing two former suspects over the weekend, police said they wanted to interview Smollett again — and days later declared him a suspect.

Along with the remarks Johnson made about Smollett’s dissatisfaction with his salary during Chicago PD’s Thursday presser, the superintendent also said the actor sent the letter threatening to Fox himself. When Johnson first made those statements, he did not mention its source or his proof.

Minutes later, during the media conference’s Q&A portion, the police superintendent responded “yes” to a reporter who asked if that information came from brothers Olabinjo (“Ola”) and Abimbola (“Abel”) Osundairo, who were initially persons of interest and turned out to have both worked on “Empire.”

Johnson also said the following of Smollett’s photographed wounds: “So, of course, it was staged. The brothers had on gloves during the staged attack where they punched him a little bit. But as far as we can tell, the scratches and bruising that you saw on his face were most likely self-inflicted.”

In a later press conference, Cook County Assistant State’s Attorney Risa Lanier detailed the prior relationship between Smollett and Abel Osundairo, saying that he was a source of “designer drugs” for Smollett and that they had been friends since late 2017. Lanier also detailed the timeline of events, including when and how Smollett convinced Abel, and later his brother, Ola, to stage an attack on him.

The Osundairo brothers were released without charges last Friday after the police said “new evidence” had emerged and that the investigation’s “trajectory” had changed course. Earlier this week, CNN reported that Chicago police believed that Smollett might have paid the brothers to stage the attack.

Cook County State’s Attorney Kim Foxx recused herself from the investigation Tuesday to avoid “potential questions of impartiality,” a rep for Foxx said. First Assistant State’s Attorney Joseph Magats has been set to act as prosecutor in her place.