“Justice League” reshoot director Joss Whedon is causing some confusion — and a whole lot of anger — among fans for appearing to agree with some pointed criticism of the very film he finished helming after Zack Snyder stepped down.

Whedon set off a firestorm on Twitter for liking a tweet criticizing “Justice League” villain Steppenwolf (voiced by Ciarán Hinds in the tentpole film which lands in theaters this weekend).

Whedon liked Vanity Fair’s Joanna Robinson Twitter message, which went: “#JusticeLeague‘s Steppenwolf is the worst comic book movie villain of all time and not even Malekith the Accursed comes close.”

Also Read: 'Justice League' Rotten Tomatoes Score Is in and It's Not Good 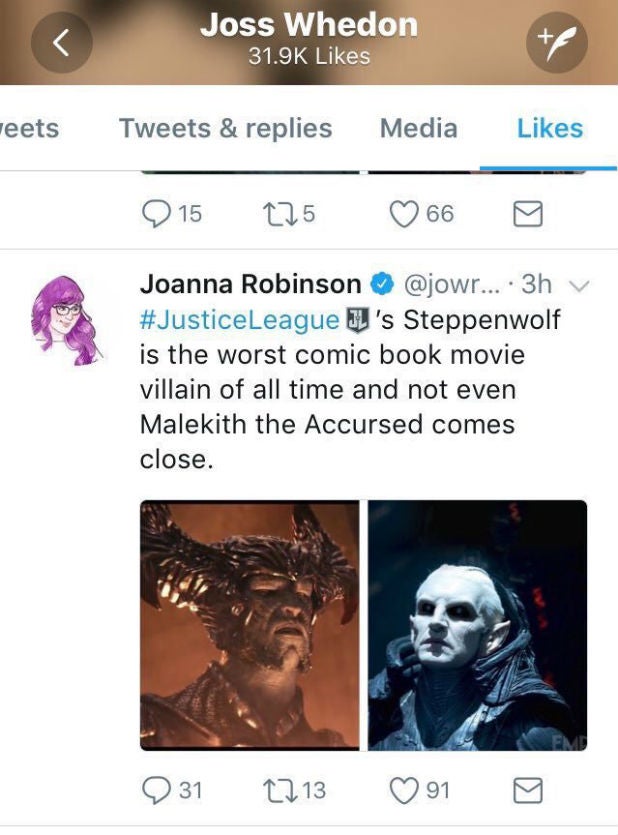 An odd reaction coming from the movie’s own filmmaker — who is also credited for co-writing the screenplay — to say the least.

The response from DC fans has been brutal. “You are absolutely repulsive. How dare you even like this tweet?” one fan wrote.

“Your fingerprints are all over this film & you have yet to voice out any kind of support for it. You are despicable & you have singlehandedly ruined @ZackSnyder’s #JusticeLeague,” she added.

Also Read: Does 'Justice League' Have a Post-Credits Scene?

Your fingerprints are all over this film & you have yet to voice out any kind of support for it. You are despicable & you have singlehandedly ruined @ZackSnyder’s #JusticeLeague. pic.twitter.com/M5oPWp6N8y

“Justice League” producer Charles Roven recently said Whedon was responsible for 15 to 20 percent of the finished film. Zack Synder is credited as the film’s sole director.

The film’s credits do recognize Whedon for his contributions to the screenplay, along with writer Chris Terrio, who previously co-wrote “Batman v. Superman: Dawn of Justice.”

Here are some other tweets.

Some thoughts: Justice League is a great movie, but all the "bad" things in it are clearly the work and direction of @joss.
Also, his "like" to the tweet trashing Steppenwolf is disgusting.@wbpictures do not make that Batgirl movie.
We don't need uninspired, badly made movies.

Hey @joss. It’s one thing to not promote a film you completed. But to have the lack of decency & the unmitigated gall to like tweets trashing a film that YOU took over for Zack in his time of mourning is disgusting. If you don’t like it, then we all rather have you simply shut up

@joss can you at least have the decency to respect the work of a director who trusted you enough to help him complete his project in difficult times? ???? pic.twitter.com/gDSRcwISUD

So Joss Whedon ruined Justice League with his sexualization of the characters and bad CGI, but he has the nerve and audacity to come on Twitter and trash the movie. It's time for the DCEU fans to run him off twitter like the MCU fans once did. pic.twitter.com/IDYgca63bE

Joss Whedon favorited a tweet about how Steppenwolf is the worst comic book villain in CBM history when:
1) He created Ultron
2) He is credited as writing the freaking screenplay of the movie.

Warner Bros. and reps for Whedon declined to comment.