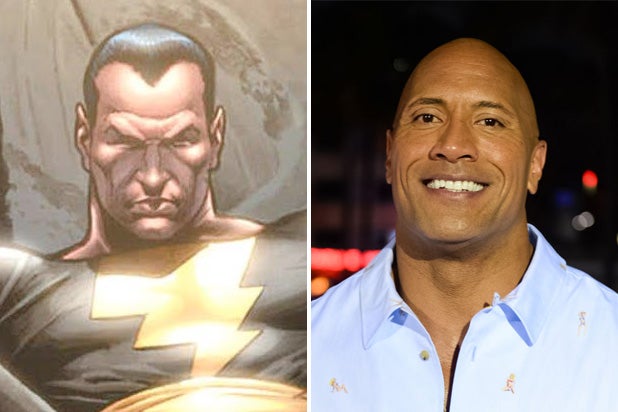 A blast from the DC Comics past is finally getting the big screen treatment, as The Justice Society of America will be featured in New Line’s upcoming “Black Adam,” star Dwayne Johnson said Thursday.

During the press junket Thursday for “Jumanji: The Next Level,” Johnson told Screenrant that the film “will introduce you to that, the world to JSA.”

Created by editor Sheldon Mayer and writer Gardner Fox in 1940 for All-Star Comics, the Justice Society of America is notable not only as the first superhero team in comic book history but, because it featured characters owned by both National Comics and All-Star Comics publisher All-American Publications, also as the first crossover between rival comic book companies.

National contributed its characters Doctor Fate, Hour-Man, the Spectre, and the Wesley Dodd version of The Sandman (an entirely separate character from one created by Neil Gaiman in 1988). All-American meanwhile contributed The Atom (Al Pratt), the Jay Garrick version of The Flash, the Alan Scott version of Green Lantern, and the original Hawkman (Carter Hall).

Eventually, National’s Superman and Batman were introduced as honorary members, and National’s Wonder Woman joined full time (unfortunately, she was written as the Justice Society’s secretary. Thanks, sexism). And by the end of 1945, National and All-American had merged to form the company now known as DC Comics.

However, due to a general decline in readership for superhero comics, DC ceased publishing Justice Society adventures in 1951 and most characters associated with the team were retired. As interest in superheroes began to rise again later in the decade, Green Lantern and The Flash were rebooted as entirely new characters and in 1960, they were teamed up with Superman, Batman, Wonder Woman, Aquaman and Martian Manhunter to form the first version of the Justice League of America.

DC ultimately explained the disappearance of JSA and most of its heroes with a 1961 “The Flash” story called “The Flash of Two Worlds,” which introduced the multiverse concept. JSA adventures were said to have taken place on Earth 2, which is why the then-current versions of DC’s heroes had no affiliation with the team. Later, with 1985’s “Crisis on Infinite Earths” crossover event that rebooted the entire DC Comics universe, it was established that the JSA was a precursor to the Justice League that formed during World War II; that remains the team’s official history in the DC Comics universe to this day.

Also Read: 'Stargirl' to Air on Both DC Universe and The CW

Production on “Black Adam,” is slated to begin in June. Johnson will produce the film with Dany Garcia and Hiram Garcia via their Seven Bucks Productions banner, along with Beau Flynn and executive producer Scott Sheldon of FlynnPictureCo. Jaume Collet-Serra will direct.

Though the character is one of Shazam’s greatest enemies, Johnson didn’t show up as Black Adam in David F. Sandberg’s “Shazam!” earlier this year; the explanation at the time was that both characters required their own introduction in separate films. But the character was teased when the Wizard first summons Billy Batson to the Rock of Eternity, and tells the story of a champion he had selected thousands of years earlier, who became a force for evil and destruction instead of good. A golden hologram appears inside the Rock of Eternity as the Wizard tells the story, clearly showing the previous champion to be Black Adam.