Like the runaway bus in his popcorn classic hit “Speed,” Graham Yost’s writing pace can’t be allowed to dip under 50 mph. without jeopardizing anything that gets in its way. His writing career has veered from TV comedies to prestige miniseries. He served as a co-executive producer, writer and director on this week’s HBO blockbuster “The Pacific,” and is also showrunning FX’s “Justified,” which premieres Tuesday night and looks to be TV’s next big-buzz hit.

Yost spoke with Eric Estrin about his rise from “Turkey Television” to the exhilaration of “Speed.” 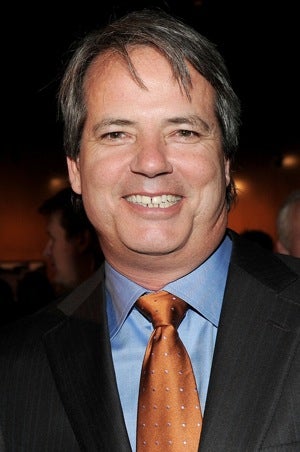 I grew up in Toronto. My dad Elwy Yost had a show about movies on TVOntario, which was basically Ontario’s PBS, for 25 years. So I grew up in a house where we lived, ate, slept and we breathed movies and books. The idea of becoming a writer was not that weird.

I moved to New York when I was 22. A friend went to Columbia Journalism School, and I went up and looked at the job board and got work writing for Encyclopedia Britannica and then for Soap Opera Digest. Basically I would write anything that I could get paid to write.

I had a friend who played baseball on the Doubleday softball team. And I went out to see him and I developed a crush on a woman. It turned out she had a boyfriend, and then I met the boyfriend and really liked him. He was doing some editing for Nickelodeon, and that’s how I got in the door at Nickelodeon.

I wrote jokes for this silly clip show they did called “Turkey TV.” I wrote jokes with Adam Bernstein, who went on to a directing career. And then our boss Geoff Darby had some money left over at the end of the year, and he hired us to write a script. We came up with a concept called “The Monster Hunters League.” It never got produced, but that was the first script that I was paid to write.

Meanwhile, on the side I was working on screenplays.

Maybe a year or two later, Nickelodeon was looking for writers for this new show called “Hey Dude,” and they dug my script out and read it and really liked it. So I did “Hey Dude” for two years.

After that was done I was kind of miffed that they hadn’t offered me a development deal. They hadn’t put me on any other show. I was kind of swinging in the wind. I had run this show for them for a year, worked on it for two years, so grumbling to myself, I kind of decided, well, I’ll write a half-hour spec. So I did a “Murphy Brown.”

I had an agent by that point and she said, “You should also write a family-based comedy,” so I did a “Roseanne” spec. So I had those two specs. She thought they were really strong, but that was like January and it was gonna be another three or four months before staffing.

So I remember having lunch with a writer friend, and I said I’ve got this idea for a movie: There’s a bomb on this bus and if it drops below X speed, it’s gonna blow up. And he said, “That’s a good idea, you should do that.” So I started working on “Speed.”

I’d probably written 10 movie scripts before then, none of which had sold, but I kind of knew with “Speed” that I had a very marketable idea.

Meanwhile, I got staffed on “Full House,” which was really not a good fit for me. I did it for nine and a half weeks — and I quit four days before I was gonna be fired. I was on a 10-week probationary period, and I knew I wasn’t gonna make it.

I think it was on a Thursday, and the next day “Speed” sold to Paramount and, you know, that changed everything.

I wrote it in the spring of ’91, sold it in August of ’91, but I still needed work. Norman Lear was starting a show, created by Marta Kauffman and David Crane, who later went on to create “Friends,” and the show was called “The Powers That Be.” I got staffed on that show in September of ’91, and it sort of stumbled along for two years. That was a lot of fun; that was a really smart half hour, and I learned a lot writing that show.

When that was finally done, “Speed” was starting to pick up momentum — pun intended, I guess. What happened was, Paramount had kind of lost interest. There was an exec at Fox named Jorge Saralegui, and he was looking for a writer to do a rewrite on a script they had called “Hamlet” about a pig in witness protection.

So my agent sent over “Speed” just as a feature sample, and he read it and said, “Well what’s happening with this?” And she said, “Well, I think it’s in turnaround at Paramount.” So he put the push on at Fox to get the script purchased.

I remember first watching it in the Little Theater on the Fox lot. I thought the elevator sequence was good. It wasn’t exactly as I imagined it, but it was pretty good. And then the moment Keanu jumped on the bus and the bus sequence started, I just realized, I just had this thought — Oh my God, my life is changing right now as I sit here.