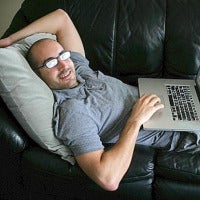 With a new book and a sitcom inspired by his S—MyDadSays tweets, Justin Halpern hasn’t had much time to update the page that made him famous.

The phenomenon began in August 2009 when Halpern moved back home with his parents and began writing Tweets based on his Dad’s old-school, politically incorrect words of wisdom. Eventually, more than 1.3 million people signed on, and the ensuing buzz landed him a book and TV deal.

"$#*! My Dad Says" — the official title so far — will be premiering on CBS this fall, with Halpern one of the writers, along with "Will & Grace’s’" David Kohan.

Halpern told TheWrap that Tweeting is difficult these days, because working on the show and touring to promote the book are keeping him from spending time with his father. "I’m only here a couple of days a week … I’m not around him as much." Asked if he thinks of his father as a muse for his Tweets, he laughed, "I’m away from my muse. He’ll enjoy hearing that you called him that."

In Halpern’s absence, other writers have been making their own S—MyDadSays mashups on Twitter. One of the most popular is S—MyDarthSays, which has more than 12,000 followers and contains purported dialogue between Darth Vader to his son Luke Skywalker.

The writer, who has remained anonymous so far, is comedian and blogger Alex Blagg, who came out from hiding first for TheWrap. Blagg said he’s not hoping to land a book or TV deal with the S—MyDarthSays Twitter page. "I could never really exploit it financially because I’d be sued by two separate entities," said Blagg.

For his part, Halpern is a fan of S—MyDarthSays. "It’s really funny," said Halpern. There have been other S—MyDadSays imitators, but Halpern said S—MyDarthSays is "the only one I’ve seen that I remember … I thoroughly enjoy that one."

Halpern also is enjoying all of the coverage the show is receiving, even though many media outlets have tripped over themselves trying to refer to the rather unconventional title. For example, the New York Times has taken to calling the show "Bleep My Dad Says."

Halpern said he knew having a swearword in the title would cause issues, but he’s glad they were able to retain the name of his original Twitter account. "We want it as close to the Twitter page as possible, but we have to abide by decency standards… I’m just glad it didn’t turn into a cheesy sitcom name like ‘Back With Dad,’" he said.