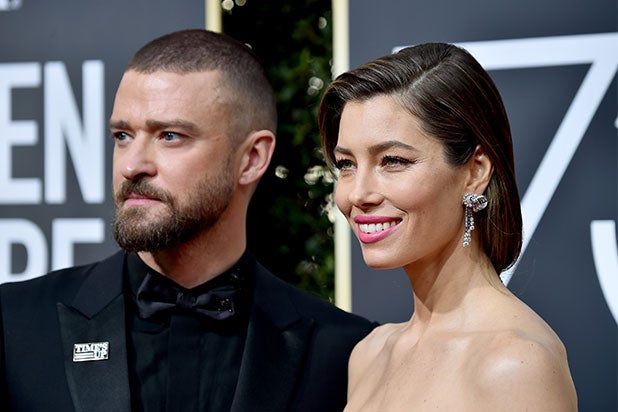 Justin Timberlake is supporting the #TIMESUP movement at the Golden Globes this year, but fans were quick to call him out on social media given that he starred in Woody Allen’s recent movie, “Wonder Wheel.”

When Timberlake tweeted, “Here we come!! And DAMN, my wife is hot! #TIMESUP  #whywewearblack,” some were quick to respond, “you literally worked with a known predator and are starring in his movie” and “If you truly believe times up then don’t work with Woody.”

Here we come!! And DAMN, my wife is hot! #TIMESUP  #whywewearblack pic.twitter.com/q0XWH6XR68

“How do you justify wearing black in sympathy with victims of sexual assault while appearing in a new woody allen film?” wrote another.

Also Read: 'Wonder Wheel' Actor Calls Working With Woody Allen 'One of My Most Heartbreaking Mistakes'

Timberlake most recently starred in Allen’s “Wonder Wheel,” which hit U.S. theaters last month. On Saturday, another actor in the film, David Krumholtz, said that he “deeply” regretted working with Allen on his most recent film, calling it one of his “most heartbreaking mistakes.”

Allen has been accused of sexual assault by his adoptive daughter Dylan Farrow, an allegation for which he was investigated in 1992 but never charged. Allen has denied the allegations as an invention of Farrow’s mother, actress Mia Farrow, but they were brought back to the public’s attention when Farrow detailed her experience in an open letter in the New York Times in 2014.

Last month, she published a new op-ed in the Los Angeles Times, in which she called out Kate Winslet, Blake Lively and Greta Gerwig for working with Allen amidst the accusations.

A spokesperson for Timberlake has not yet responded to TheWrap’s request for comment.

See tweets about Timberlake below.

If you truly believe times up then don’t work with Woody.

"I'm starring in a well known rapist/pedophile director movie this year but I wore black at the #GoldenGlobes so that's ok."#WoodyAllen #WhyWeWearBlack #TIMESUP

Says the fool in the Woody Allen movie

You worked with Woody Allen

Dude you are in the new Woody Allen film. Shut it.

He’s IN the new woody Allen movie. So yeah he’s not standing up at all is he

how do you justify wearing black in sympathy with victims of sexual assault while appearing in a new woody allen film?

“A revolution is taking place”

"I am wearing black to thank and honor all the brave whistleblowers who came forward and shared their stories of harassment and discrimination," Messing said on Sunday's Golden Globes red carpet. She added that she's "shocked to to hear E! doesn’t believe in paying their female hosts the same as their  male hosts," referring to Catt Sadler's exit from the network after learning she wasn't paid as much as her male counterpart, Jason Kennedy. "Women are just as important as men," she said.