UPDATED at 4.39 p.m. PT: Station employees were given the all clear and allowed to return to the building after authorities ruled the threat to be a hoax.

The alert was sparked when a man called the Glendale Police Department around 2:45 p.m. PT to say that there were several bombs in the ABC7 building at 500 Circle Seven Drive, ABC7 News reported. Shortly after, the evacuations began.

While waiting for the all clear to return to their studios, ABC7 mobilized and began setting up to deliver “Eyewitness News” from a lawn outside the building. 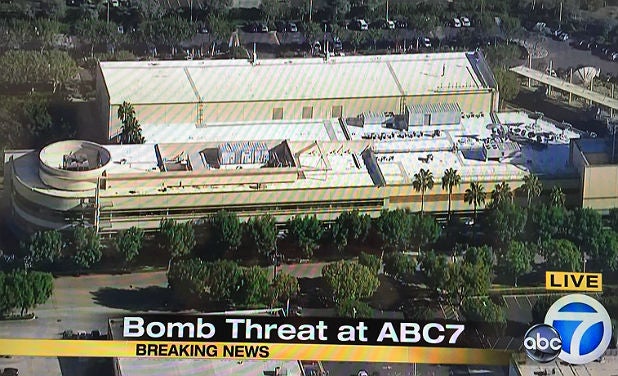 The outdoor production was arranged in a matter of minutes and newscasters Ellen Leyva and David Ono began going live on the air at 4 p.m. PT. Leyva and Ono delivered the newscast flawlessly, even though there was clearly a difference in the production value of the outdoor show and what viewers normally see on the air. 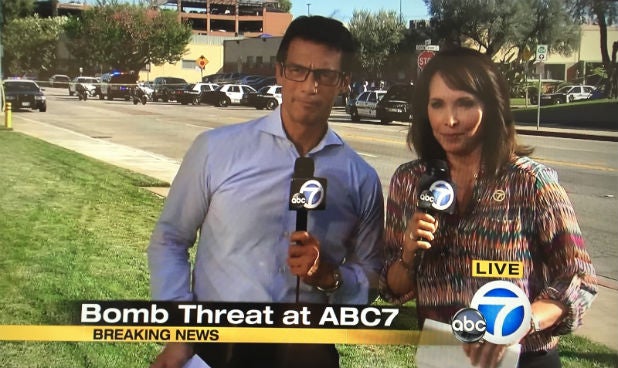 Reporter Elex Michaelson stood on a nearby street corner and said no other buildings in the neighborhood had been evacuated.

Later, weathercaster Dallas Raines stepped in and delivered a rather low-tech weather report without his usual graphics and animation setup. As Raines gave the seven day forecast, a station employee held up an iPad with a map on it. Raines took it all in stride and joked about his hastily-arranged weather report. 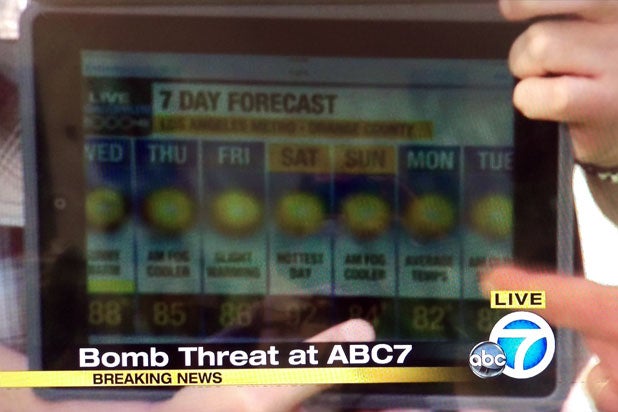 Bomb-sniffing dogs were investigating the threat as the newsroom remained empty, and the station showed video of police officers canvassing the area.

At 4.39 p.m, station employees were given the all clear and allowed to return to the building after authorities ruled the threat to be a hoax.

See tweets from the news station below.

#Air7hd high overhead keeping an eye on things as we remain evacuated from the @ABC7 building. pic.twitter.com/268QwEIVUe

Not kidding. A bomb threat @ABC7 has us setting up for an outdoor newscast at 4pm pic.twitter.com/b8gqvVqG70

We're 2 minutes away from a very interesting @ABC7 News at 4. We're live outside due to bomb threat. pic.twitter.com/rYJY1myE0i

Preparing to broadcast live from the lawn during bomb threat evacuation http://t.co/SYEJIocjPe pic.twitter.com/vqip1U1r2m