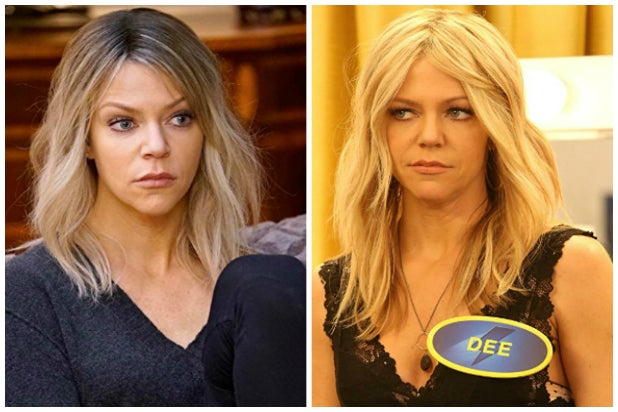 Don’t try to typecast Kaitlin Olson, Hollywood. Yes, she plays pretty selfish and arguably awful characters on both of her excellent sitcoms, but Mackenzie “Mickey” Murphy and Dee Reynolds are quite different. Just ask the actress — we did.

“[Mackenzie] was garbage before, but it really was just like because she was a survivor,” she continued. “Dee’s just like desperately trying to get the approval of those idiots that she hangs out with.”

We already wrote up a “Sunny”-focused story from our recent conversation with Olson, so let’s focus on her Fox comedy for the rest of this piece, shall we?

This reporter has already showcased his love for Scott MacArthur’s character Jimmy (here and here) — throw in his beloved-but-withholding Mackenzie, and I’m extra-invested. But is the Mickey-Jimmy relationship even a true “Will They/Won’t They”?

Read Olson’s thoughtful response to that question below one last “Also Read.”

“It’s so funny, we were just talking about that,” she said. “It’s such a big question for me, and something I find so fascinating and want to do something interesting with. We kinda started exploring that this year. So coming up really soon, there’s gonna be an episode where we go back to Warwick and you kinda see where Jimmy and Mickey come from. And there’s this big reveal because Mickey really betrayed him pretty badly and he doesn’t know about it yet.

Having it just be like, ‘Ugh, Jimmy, he’s my guy,’ that was fun for an episode or two because it was so funny to me — but then when he stuck around it was like, ‘I don’t know how I feel about this person,'” Olson continued. “It’s definitely a topic that we talk about a lot, because I think once you switch to ‘They Will,’ there’s really no going back from that. So I think we’re trying to make it as interesting as possible for as long as possible.”

“The Mick” airs Tuesdays at 9/8c on Fox — you know, when the World Series doesn’t bump it off the schedule.