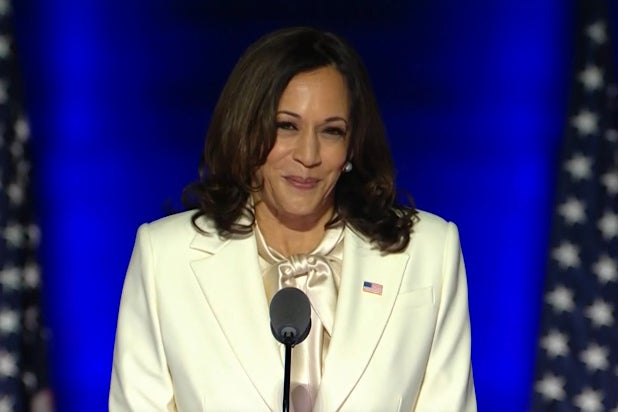 UPDATE: 2:12 PM PT — Updated to include a statement from Vogue.

Vice President-elect Kamala Harris will grace the cover of Vogue’s February issue, but the photo used for the issue that subscribers will receive this week is not the one agreed upon by the magazine and the politician’s team.

On Saturday, Huffington Post contributor Yashar Ali reported on Twitter that Harris’ team and the Vogue team, headed by Anna Wintour, had mutually agreed upon a waist-up image of Harris in a powder-blue suit with an orange background. While that image will be used as the cover for the digital version of the issue, the one selected for the print edition is a full-body image of Harris in a black blazer and jeans with Converse sneakers. Ali says that it is standard for fashion magazines to mutually agree with their subjects upon which photos will be used for print and that members of Harris’ team “feel blindsided.”

4. Here is the Vogue cover Kamala Harris’ team thought would be released.

I’m told this cover on the left will be the digital cover, but the much maligned cover on the right has already gone to print and will be the cover available for sale and sent to subscribers. pic.twitter.com/5eWjPMTbdP

In a statement, Vogue said the print cover image was chosen as a celebration of Harris’ approachable nature as a political figure: “The team at Vogue loved the images Tyler Mitchell shot and felt the more informal image captured Vice President-elect Harris’s authentic, approachable nature–which we feel is one of the hallmarks of the Biden/Harris administration. To respond to the seriousness of this moment in history, and the role she has to play leading our country forward, we’re celebrating both images of her as covers digitally.”

An individual at Vogue with knowledge of the shoot also tells TheWrap that the magazine did not negotiate cover image approval with Harris or her team.

But Ali’s report has led to renewed public backlash against Anna Wintour, who last month was promoted by Conde Nast to be its worldwide chief content officer. Ali also reported that former Conde Nast and Vogue employees have told him that Wintour, the longtime editor-in-chief of Vogue and one of fashion’s biggest tastemakers, “does not truly respect Black women and most of her editorial decisions around Black women certainly reflect that sentiment.” Wintour has faced significant criticism since the resurgence of Black Lives Matter last summer over Vogue’s depictions of Black women, including poorly-lit photos of Olympic champion gymnast Simone Biles. A New York Times report last fall included interviews from former Vogue employees who accused Wintour of “tokenizing” Black employees. In addition, former Vogue editor-at-large Andre Leon Talley wrote in his 2020 memoir that Wintour suddenly ostracized him after the two enjoyed a strong personal and professional relationship for years.

Also Read: Anna Wintour Says Vogue Has 'Made Mistakes' with Diversity and Race

“Anna now treats me as a former employee. Like any ruthless individual, she maintains her sangfroid at all times,” Talley, who is Black, wrote. “I believe she is immune to anyone other than the powerful and famous people who populate the pages of Vogue. She has mercilessly made her best friends the people highest in their fields…I am no longer of value to her.”

In June, Wintour apologized for not including Black voices in the staff and pages of her magazine and dedicated the magazine’s September issue to Black icons like Beyonce with photos by Tyler Mitchell, who shot Harris’ cover photo. “I want to say this especially to the black members of our team — I can only imagine what these days have been like,” Wintour said. “But I also know that the hurt, and violence, and injustice we’re seeing and talking about have been around for a long time. Recognizing it and doing something about it is overdue.”