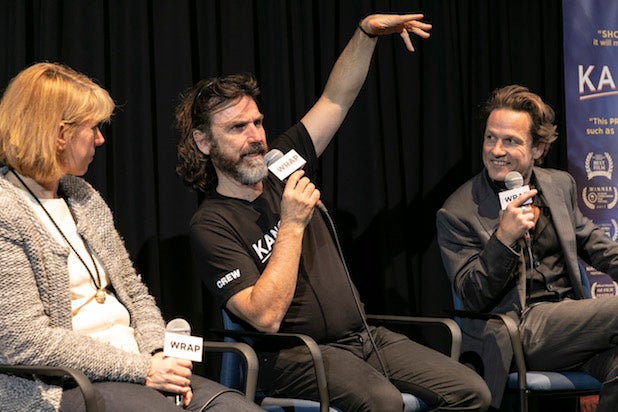 Australian director Mick McIntyre says he has received death threats over his documentary “Kangaroo: A Love Hate Story” — but that the threats are all part of creating change.

The Australian entry for the Best Documentary feature for the 2019 Academy Awards delves deep into the dark and disturbing slaughter of Australia’s national icon, the kangaroo. Following a screening of the documentary, nearly five years in the making, McIntyre and actor and activist Martin Dingle Wall sat down with TheWrap CEO and founder Sharon Waxman to discuss the difficulties of creating the film.

“We were surprised there’s never been a film about this icon before,” McIntyre said at The Landmark Theater in Los Angeles. “This is a barbaric, cruel practice that’s going on in Australia. … It’s an uncomfortable issue, that’s why there are uncomfortable parts in the film.”

Between majestic shots of the animals hopping across red Australian plains are shocking and disturbing scenes of mass slaughter. McIntyre said the scenes were critical to expose the harsh realities of the kangaroo-meat industry.

As native Australians, McIntyre and Dingle Wall said they both grew up knowing anti-kangaroo sentiments were deeply engrained in the country’s culture. Also at issue were health concerns around eating kangaroo.

Extreme perspectives towards the animals and secrecy shrouding the meat industry made it hard for McIntyre to find interview subjects, he said.

The film, co-directed by Kate McIntyre Clere, primarily focuses on the ethical and scientific issues that come with the killing and selling of the animal and its by-products, McIntyre said. The film includes kangaroo lovers, academics and government officials.

“I wanted to make sure we covered every angle of the film,” McIntyre said.

Also Read: 'RBG' and 'Won't You Be My Neighbor?' Among 166 Documentaries Submitted for Oscars

McIntyre told TheWrap that the government has scrutinized and criticized his work. But he feels a duty as a documentary filmmaker to enlighten the public.

“I live in the country and I have to deal with the abuse that we’re getting and the death threats we’re getting, but that seems to come with trying to create something different and creating change,” he said.