An episode of the LeBron James-produced show “The Shop: Uninterrupted” featuring Kanye West will not air due to “hate speech and extremely dangerous stereotypes” the rapper said during his appearance.

Precisely when the episode was taped has not been disclosed. Representatives for the show’s various producers didn’t immediately respond to requests for comment from TheWrap. But in a statement, first provided to Andscape, Maverick Carter, CEO of “The Shop” production company Springhill Entertainment, confirmed West was invited to appear on the show after his recent outbursts of anti-Semitic and bigoted public statements.

Carter said he believed West “was capable of a respectful discussion and he was ready to address” his recent comments. Carter also apologized for making that mistake.

“Yesterday we taped an episode of The Shop with Kanye West.  Kanye was booked weeks ago and, after talking to Kanye directly the day before we taped, I believed he was capable of a respectful discussion and he was ready to address all his recent comments. Unfortunately, he used The Shop to reiterate more hate speech and extremely dangerous stereotypes,” Carter said. 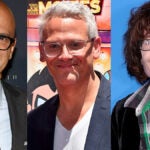 “We have made the decision not to air this episode or any of Kanye’s remarks.  While The Shop embraces thoughtful discourse and differing opinions, we have zero tolerance for hate speech of any kind and will never allow our channels to be used to promote hate. I take full responsibility for believing Kanye wanted a different conversation and apologize to our guests and crew.  Hate speech should never have an audience,” the statement concluded.

According to Andscape, LeBron James was not present when West’s remarks were recorded.

The incident comes after a string of racist outbursts from the rapper. On Saturday, West was suspended by Instagram for unspecified violations of the company’s content policies. In response, he tweeted anti-Semitic threats, which led to his suspension from Twitter.

West also gave an interview to right-wing Fox News host Tucker Carlson, whose show has been a haven for racist and eliminationist rhetoric, leading The New York Times to bluntly describe it as “the most racist show in the history of cable news.”

On Tuesday, it was revealed that West made several hateful and bigoted remarks during the talk, which Carlson edited out without disclosing to viewers that he had done so.