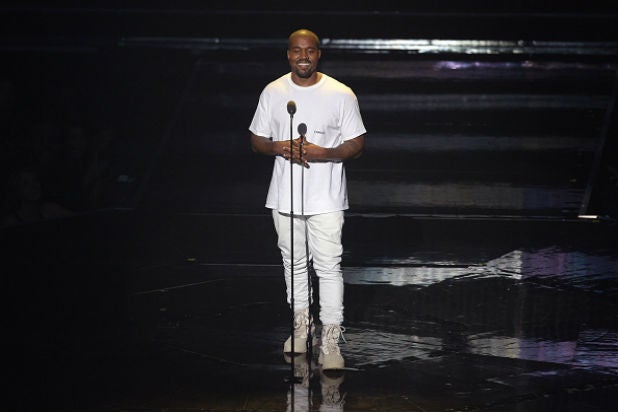 Kanye West had nothing but love for Taylor Swift and Amber Rose at Sunday’s MTV Video Music Awards.

“I see you Amber!” West said to Rose, who was in the crowd during his speech. The two famously dated before West married Kim Kardashian in 2014.

Later, West said, “People come up to me, like, ‘That’s right, tell Taylor!’ I’m like, ‘Bro, I love all y’all! That’s why I called her!'” West was referencing his ongoing feud with Swift.

After he dropped her name in a song on his new album, Swift claimed West had not cleared using her name with her beforehand. Kardashian then released a video of a phone call between West and Swift from before the album was released showing them discussing the lyric.

West also made sure to mention how much of a genius he was at least once, particularly for his new music video “Famous.”

“Just the audacity to put Anna Wintour next to Donald Trump,” he said. “I put Ray J in there, bro!” The music video featured West and Kardashian naked in bed with a number of people, including Ray J, who appeared in a sex tape with Kardashian back in 2003.

Yet as far as West’s VMA speeches go, this one was pretty tame. After last year when he famously declared that he would run for President in 2020, one almost expected him to announce he was running for Emperor of the Moon this year.

And then of course there was 2009, when he interrupted Swift’s acceptance speech to say that Beyonce should have won.