Kanye West has been named as a suspect in a battery investigation by Los Angeles police, LAPD officials confirmed to TheWrap.

The incident in question, which was first reported by Fox 11 Los Angeles, occurred before dawn on Thursday morning outside of the members-only club SoHo Warehouse in downtown Los Angeles as the 44-year-old rapper, who also goes by the name Ye, reportedly got in an altercation with a fan. TMZ also posted a video of West taken by a bystander outside the club of the rapper yelling at someone and reportedly taken around the time of the alleged incident. 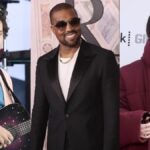 The investigation comes less than 24 hours after West was named as one of the headlining acts for this year’s Coachella music festival alongside Billie Eilish and Harry Styles. Representatives for West did not immediately respond to TheWrap’s requests for comment.