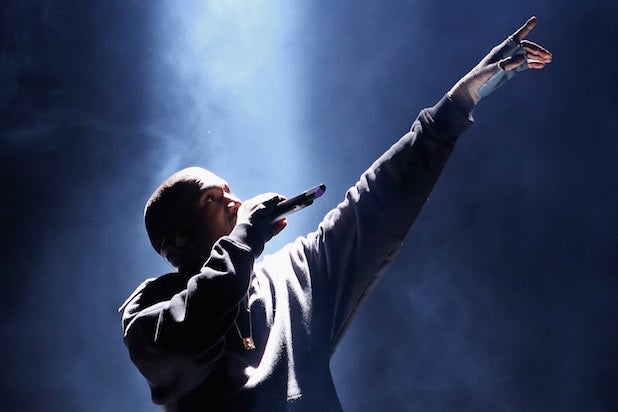 Donald Trump thanked Kanye West on Friday for having “performed a great service to the Black Community” by praising the president on Twitter.

But West’s recent tweets — saying that he loved Trump like a brother because they both shared the same “dragon energy” — went too far, even for some of his most ardent fans.

“I don’t appreciate the fact that he looks like Trump’s evil side kick at the moment,” Los Angeles’ Power 106 host J Cruz told TheWrap.

Cruz, who still considers himself a fan of West, said the rapper’s latest antics have already alienated many of his biggest supporters, who saw his presidential bear hug as the ultimate diss.

“People are brokenhearted about the situation,” Cruz said. “They were even upset at me for saying I was still a fan.”

Many of Cruz’s callers on Thursday told him they would no longer support West or the stations that play his music.

“I was a big fan of Kanye up until then,” a male caller said, referring to Kanye’s latest dragon tweets. “But that was enough for me,” he said.

“You know what?” the caller added. “Every time I hear his song I’m going to change [the station].”

One female caller said she thought Kanye “is backing Trump.” The caller also said she believed the president was “racist and anti-Mexican.”

On Wednesday, West seemed to outrage many of his fans, when, in a string of tweets, he defended his appreciation for the president.

“You don’t have to agree with Trump but the mob can’t make me not love him,” West said. “We are both dragon energy. He is my brother. I love everyone. I don’t agree with everything anyone does. That’s what makes us individuals. And we have the right to independent thought.”

Cruz, who estimated that he plays anywhere from three to eight West songs each day, said he was torn about the rapper’s recent revelations.

“I’m such a fan but he’s made it tough to defend him,” he said almost apologetically.

Cruz and his listeners are not the only ones with a bone to pick. Singer John Legend sent him a text essentially chastising him for praising a president who does not have the support of many African-Americans for his inflammatory racial rhetoric.

“You’re way too influential to endorse who he is and what he stands for,” Legend wrote. “So many people who love you feel betrayed right now because they know the harm that Trump’s policies cause.”

This isn’t the first time West has publicly proclaimed his admiration for Trump. In 2016, then President-elect Donald Trump and Kanye West had reporters doing a double take when they stood together in the lobby at Trump Tower in New York.

West later told fans he “wanted to meet with Trump today to discuss multicultural issues,” adding that it was “important to have a direct line of communication with our future President if we truly want change.”

While the meeting at Trump Tower didn’t seem to hurt West’s standing among his fans, the same can’t be said about his recent tweets.

“It’s a slap in the face towards black folks,” Ryan Mack, financial expert and contributor to Financial Juneteenth, a site dedicated to empowering the black community, told TheWrap.

“You’re hugging a man that said that Nazi’s who want to kill me are very fine people,” Mack said. “I can’t agree with that.”

Of course, there is always the chance that West is not particularly fond of Trump and is just using the president to promote his upcoming album, which is expected to drop soon.

“I can almost be certain that Kanye isn’t a fan of [Trump’s] ideology and his plan,” Cruz said. “I’m smart enough to know that this is part of a rollout, it’s all promotional.”

But that didn’t stop him from being disappointed.

“I can tell you that he’s not my favorite person right now,” he said.

Also Read: Kanye West Reaffirms His 'Love' for Trump: 'He Is My Brother'

It’ll be interesting to see what affect, if any, these tweets will have on Kanye’s brand or his presidential aspirations. During the 2015 MTV’s Video Music Awards, West decanted he was running for president in 2020. He then pushed back his candidacy after his Trump Tower meeting, saying he wait until 2024, presumably to accommodate the president’s 2020 reelection campaign.

“It’s hard to see what his constituency would be,” Jack Pitney, professor of government at California’s Claremont McKenna College, told TheWrap. “African-Americans aren’t going to support him because he’s embraced Trump and it’s hard to see him getting a big contingency in the Republican party either.”