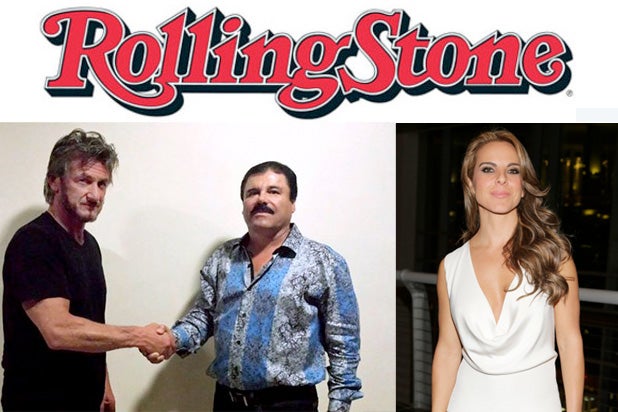 Mexican actress Kate del Castillo, who helped broker the meeting between then-fugitive drug lord El Chapo and Sean Penn, says the actor’s claims that she knew about his plans to write the infamous Rolling Stone interview were “total and complete bullshit.”

Del Castillo reveals her side of the story during an in-depth feature by Robert Draper in the New Yorker, which details everything from her first contact with Joaquín Guzmán Loera (El Chapo) to their eventual meeting. She accuses Penn of misleading her and not revealing his plans to interview El Chapo for the magazine until they were already in his presence.

It all started when she mentioned El Chapo’s desire to have a movie made about his life to Argentine producer named Fernando Sulichin at a party hosted by Oliver Stone. Sulichin and another Argentine, José Ibáñez, would eventually agree to co-produce El Chapo’s film.

Sulichin is reportedly a friend of Penn. After a discussion about the potential film with the actor, Penn requested a meeting with del Castillo at Santa Monica’s Fairmont Hotel. At this lunch meeting, arrangements to meet with El Chapo went into motion.

The New Yorker piece details that Rolling Stone founder Jann Wenner assigned Penn the story when the actor mentioned he was taking a trip to visit the Mexican drug lord regarding the film. Del Castillo says she was surprised when Penn first pitched the Rolling Stone interview directly to El Chapo. The actress claims she wasn’t aware of Penn’s intentions until they arrived at El Chapo’s hideout and he proposed it in person.

“This was not how I was expecting the night to be,” del Castillo told Draper. “But at the moment I thought, maybe we can base the movie on this article.”

Penn, however, told Draper in a statement that he embarked on the trip with Castillo “with total transparency and full knowledge of our collective interests.”

“From our first meeting, I discussed with her my intention to interview Joaquín Guzmán for an article in connection with the meeting that she facilitated,” Penn said. “We discussed it again during the flight and the trip to Mexico with our partners.”

Del Castillo played along but, as Draper writes, “After the arrest of El Chapo and the publication of Penn’s story, it soon became evident that the Mexican government was singling out del Castillo as a target of investigation.” Though El Chapo may well have exchanged texts with a number of people while in hiding, only the conversations with del Castillo were leaked to the Mexican media. Of the implication that El Chapo’s connection to her ultimately led to his capture, Castillo says, ‘I wanted to die.'”

Del Castillo reportedly retains the rights to the film project, and one of El Chapo’s lawyers allegedly believes the movie “has to go forward.”