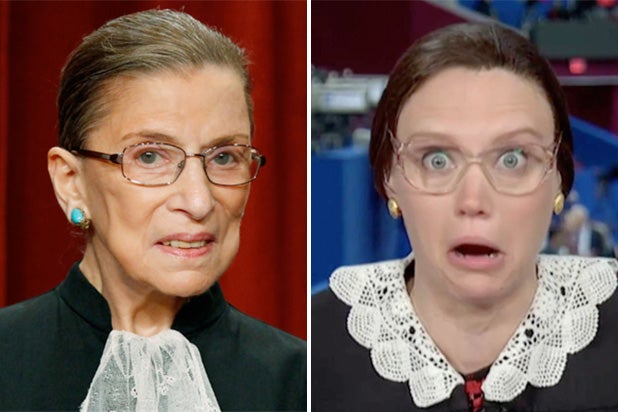 Kate McKinnon has paid tribute to the memory of Ruth Bader Ginsburg, calling her a “real-life superhero” and a “robed crusader.”

The Supreme Court Justice Ginsburg died on Friday at age 87, and McKinnon, who mimicked RBG in a series of “Weekend Update” segments on “Saturday Night Live” dating all the way back to 2015, said that playing her was a “profound joy.”

“For so many of us, Justice Ginsburg was a real-life superhero: a beacon of hope, a warrior for justice, a robed crusader who saved the day time and again. Playing her on ‘SNL’ was a profound joy because I could always feel the overwhelming love and gratitude that the audience had for her,” McKinnon said in a statement. “It was one of the great honors to meet Justice Ginsburg, to shake her hand and to thank her for her lifetime of service to this country.”

McKinnon’s character involved dropping by the Weekend Update desk from time to time to react to events in the news — like the appointment of Supreme Court Justices Neil Gorsuch and Brett Kavanaugh — delivering some sick “Gins-Burns” (“I like my men like I like my decisions, 5-4,”) and then breaking out into dance.

The real Ginsburg reacted to McKinnon’s portrayal on two occasions, saying in the documentary “RBG,” “It’s marvelously funny,” but it didn’t resemble herself one bit. “Except for the collar,” she said. Ginsburg told NPR’s Nina Totenberg that she would love to deliver a “Gins-Burn” to her colleagues if given the chance.

McKinnon wasn’t the only actress who portrayed Ginsburg to gave the late Supreme Court justice a shout-out Saturday. Felicity Jones, who portrayed her in the 2018 biopic “On the Basis of Sex,” also praising Ginsburg as a “beacon of light.”

“Ruth Bader Ginsburg gave us hope, a public figure who stood for integrity and justice- a responsibility she did not wear lightly,” Jones said in a statement Saturday. “She will be missed not only as a beacon of light in these difficult times but for her razor sharp wit and extraordinary humanity. She taught us all so much. I will miss her deeply.”

The justice and feminist icon died due to complications from metastatic pancreas cancer Friday.