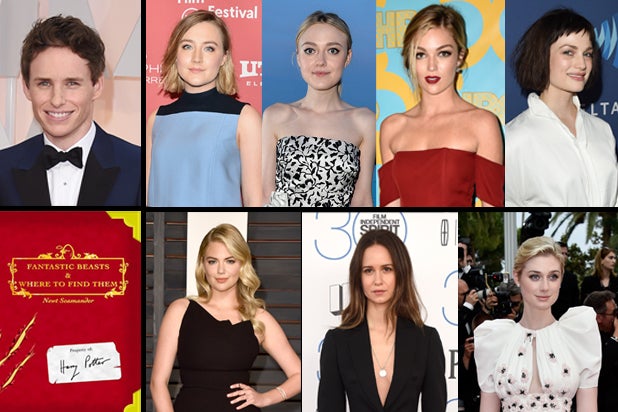 Warner Bros. and director David Yates have narrowed down their choices for the two female leads opposite Eddie Redmayne’s Newt Scamander in J.K. Rowling‘s “Harry Potter” spinoff “Fantastic Beasts and Where to Find Them,” TheWrap has learned.

Saoirse Ronan, Dakota Fanning, Lili Simmons and Alison Sudol are up for the role of Queenie, while Kate Upton, Katherine Waterston and Elizabeth Debicki are being eyed to play Queenie’s older sister, Tina, multiple individuals familiar with the situation have told TheWrap.

Though it’s unclear whether all of those actresses are available or even wish to pursue the project, several of them already have test deals in place, and Redmayne is expected to read alongside them during those tests, which are slated to take place over the next week.

As with any shortlist, this one is just a snapshot in time, as it is still early in the process and there may be others in the mix down the line. Warner Bros., for its part, had no comment.

Rowling wrote the script herself for “Fantastic Beasts,” which is set in New York roughly seven decades before the start of the “Harry Potter” saga. Only a handful of insiders have read the script, though a breakdown has been circulating throughout Hollywood’s top talent agencies.

An extension of the wizarding world first depicted in that franchise, “Fantastic Beasts” is based on the Hogwarts textbook of the same name written by Scamander, a “magiczoologist” who is an expert in magical creatures.

Debicki and Waterston are two rising stars whose careers were launched by Warner Bros., as Waterston starred opposite Joaquin Phoenix in the studio’s Paul Thomas Anderson comedy “Inherent Vice,” while Debicki burst onto the scene in Baz Luhrmann’s “The Great Gatsby” before snagging a key role in Guy Ritchie’s upcoming WB release “The Man From U.N.C.L.E.”

Upton is a well-known swimsuit model who starred in the romantic comedy “The Other Woman” and is currently filming William H. Macy’s indie “The Layover” with Alexandra Daddario. At one point she was sought for the female lead in WB’s “Entourage,” which eventually went to fellow model Emily Ratajkowski.

As two of the top actresses of their generation, Fanning and Ronan need no introduction, and both are attractive possibilities having eschewed Hollywood franchises with the exception of Fanning’s supporting turn in the “Twilight” sequels.

Simmons is an up-and-comer whoe TV credits include HBO’s “True Detective” and Cinemax’s “Banshee,” while Sudol is a talented musician who co-stars on USA’s “Dig” and Amazon’s acclaimed series “Transparent.”

“Fantastic Beasts and Where to Find Them” is intended to launch a trilogy, and Warner Bros. will release the first film on Nov. 18, 2016.