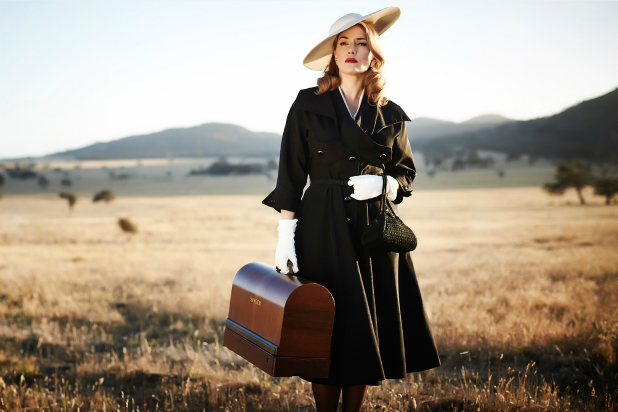 While other American states are enduring primaries,, the Nation’s Capital has been celebrating 30 years of movies premiering at Filmfest DC, Washington, D.C.’s International Film Festival, this past week and through the weekend.

This year, the festival opened with Jocelyn Moorhouse’s hilarious and poignant “The Dressmaker,” starring Kate Winslet as the sophisticated dressmaker coming home to see her elderly mother – played with a devilish twinkle by Judy Davis – and unearth what caused her exile at a young age. This Australian tragic comedy is full of witty lines, a unique mother and daughter relationship and a small town full of fascinating characters. It’s unclear if this film will be getting a wider theatrical release, so, thanks to the festival, we had the opportunity to see it on the large screen. The outfits themselves deserve an Oscar nomination.

Started by film professor Dr. Tony Gittens three decades ago, the festival continues to please audiences with some American and international films that will never be released here. Or, if they will finally make it to D.C., the festival will give a jumpstart to their releases. Producers like submitting to Filmfest DC because awards are given. Movies with music and justice themes are featured.

In the past, the festival had more funding and guests such as Charlize Theron, John Malkovich, Peter Bogdanovich, Gabriel Byrne, Amitabh Bachchan (India’s biggest movie star), Morgan Freeman, Cicely Tyson, Sydney Pollack, Oliver Platt, Edward James Olmos and Kelly McGillis have attended. Feeling a budget pinch in recent years, Filmfest DC is offering just the movies, and audiences are thrilled to be able to see them.

Not all the countries with embassies here have been so happy about the festival screenings. One year, the festival showed Paul Wagner’s brave “Windhorse,” about China’s mistreatment of Tibetan citizens, even though the Chinese authorities protested the showing.

This year, Lars Kraume’s “The People vs. Fritz Bauer” kept audiences on the edge of their seats as the story unravels, showing how Germany’s postwar attorney general asked for Mossad’s help in tracking down the leads of where Adolf Eichmann was after the war.

What makes the festival so engaging is how it lives up to its name of offering international movies that we would not be able to see otherwise. For years, Gittens has attended Cannes, Toronto and other first-rate film festivals to pick what to show here.

Deputy Director Shirin Ghareeb explained how Filmfest DC “remains the city’s oldest, largest, and only international film festival and serves an interested audience with some of the best cinema from around the world over an 11-day period. This year, our audience enjoyed international comedies, thrillers and mysteries, social justice films, and in addition a focus on Cuban cinema.”

As Ghareeb also programs a fall festival called Arabian Sights, which offers the best of Middle Eastern cinema, she also programs movies for Filmfest DC that are “coming out of the Arab world throughout the year that deal with the diverse topics that are receiving high-profile attention internationally.”

Among those films was the world premiere of Michal Goldman’s “Nasser’s Republic: The Making of Modern Egypt,” a powerful documentary about the life of Egypt’s president from 1956 to 1970 that helps to explain Egypt today. Funded by the National Endowment for the Humanities, the film combines powerful footage from back in the day while it tells the history of Nasser’s rule and the immense effect it had on the African continent and especially on overthrowing British rule.

Gittens explains how they program the films. “We research films to bring to Washington in several ways,” he says. “We attend other film festivals like Toronto and Rotterdam to see how a film plays to an audience. We also receive many submissions and have a network of colleagues who share and suggest films they’ve seen. This year the list of films we’ve considered has more than 300 entries.”

The festival ends Sunday with Philippe Falardeau in attendance with his new political satire, “My Internship in Canada,” which won many awards in Canada, including the best Canadian Feature Award at the 2015 Toronto International Film Festival.

Thanks to Gittens and Ghareeb residents of Washington, D.C., can watch some of the world’s best foreign films right in our own backyard.