Actress Katey Sagal is recovering in a hospital after she was struck by a car in Los Angeles at 11:40 a.m. on Friday morning. According to TMZ, Sagal was crossing the street at a marked crosswalk when the driver, who has not been identified, made a left turn and failed to see her.

The driver stopped and called an ambulance for Sagal, whose injuries are said to be non-life-threatening, TMZ reported. No information about an arrest or citation has been released.

An individual with knowledge of the situation confirmed that Sagal is fine and will be sent home from the hospital on Friday. 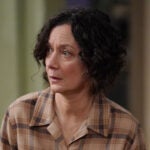 Also Read:
‘The Conners’ EPs on the ‘Civil War’ in the Writers Room Over Darlene and Ben’s Future

Sagal currently stars as Louise on the ABC sitcom “The Conners.” She made a name for herself and picked up several Golden Globe nominations for her work on the long-running Fox sitcom “Married…With Children” from 1987-97.

She later starred for seven seasons on FX’s “Sons of Anarchy,” for which she won Best Actress in a Drama Series in 2008. She won great acclaim as the matriarch of an outlaw motorcycle gang in California’s Central Valley.