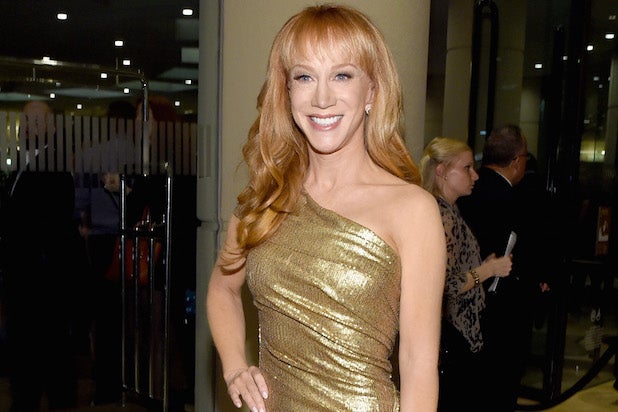 “It just didn’t work out. That’s it, that’s the scandal,” she said during a standup show in Waterbury, Connecticut on Friday in a video obtained by TMZ.

“However, Hollywood, of course, enjoys blowing something up,” she continued. “What’s nice is I got a really nice groundswell of support from other Twatters, um, from the Twitter. And that’s really nice.”

On Friday, US reported that Griffin expected she’d have more control over her role on the show and the nature of her jokes — being that she replaced Rivers, its former doyenne.

“It just didn’t work out and I’m just surprised that people are so invested in this show, but I shouldn’t be because Joan [Rivers] was so incredible and amazing,” Griffin told the Waterbury audience. “It just wasn’t the right fit for me. So, now I’m all over the TMZ and all that stuff and it’s kind of funny.”

Griffin announced her departure from “Fashion Police” in a long statement on Twitter Thursday. She made it clear that she felt her brand of comedy didn’t align with the style show.

“After 7 episodes of Fashion Police, I have discovered my style does not fit with the creative direction of the show and now it’s time to move on,” she said.

The comedian also explained, “I do not want to use my comedy to contribute to a culture of unattainable perfectionism and intolerance toward difference. I want to help women, gay kids, people of color, and anyone who feels underrepresented to have a voice and a LAUGH.”

In an email to undisclosed recipients, Griffin asked for support of her decision. Osbourne, “Girls” star Lena Dunham, and Rosie O’Donnell were among the celebrities who did publicly support Griffin, though we can’t be sure if they were included on Griffin’s email request.

Griffin also left as the show was under a cloud of controversy resulting from co-host Giulana Rancic’s comments about Zendaya Coleman during the show’s Oscars episode, which many believed were racist, and a couple weeks after five-year co-host Kelly Osbourne left the show citing the desire to explore other opportunities.