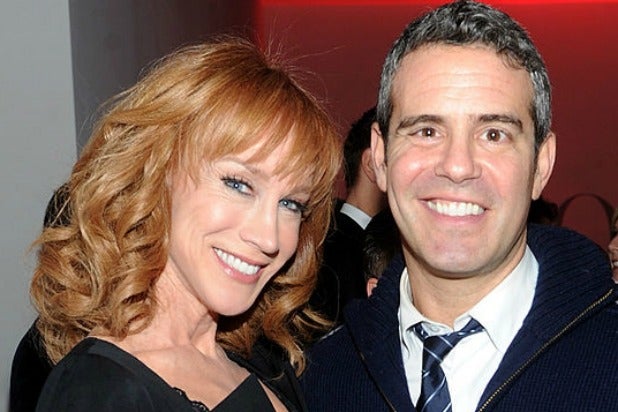 Kathy Griffin once again took aim at Andy Cohen on Friday, tweeting a message she said she’d received from a man who said he’d been intimate with the “Watch What Happens Live” host, and that Cohen “rather assertively had his way with me.”

The message also took an apparent jab at Cohen’s manhood, stating that Cohen “is a small guy, not just in height.”

“People have been opening up to me for decades in any way they can, in fact here’s just one example of someone who couldn’t help but tell me their story,” Griffin wrote Friday. “Enjoy your morning tea. Prepare yourself for some of his transparent retaliation. Do you know me now b—h?”

That last line was an apparent reference to a TMZ video in which Cohen, who’s taking Griffin’s place on CNN’s New Year’s Eve broadcast, pretended not to know who she was. Griffin was axed from the CNN gig after posing for a photograph holding a mock-up of the decapitated head of Donald Trump.

The message states that the man met Cohen through a mutual friend while attending UW-Madison, and that Cohen asked to come back to the man’s apartment after a gathering of friends over beers.

“We didn’t talk for more than a few minutes, and suddenly without a word he pushed me down on my bed. It was much more gratifying for him than it was for me as the interaction seemed entirely directed toward him getting off. Like a spoiled kid with a new toy.”

Also Read: Kathy Griffin Goes Off on TMZ's Harvey Levin: 'Who the F-- Do You Think You Are?' (Video)

“By the way Andy is a small guy, not just in height,” the letter added.

Cohen drew Griffin’s wrath in October by feigning ignorance of her in the TMZ video, prompting Griffin — whose series “My Life on the D-List” ran on Bravo for five years — to rip Cohen as misogynistic.

“Even when it’s on tape, there are doubters? He is NOT kidding w paps. Was my boss for 10 years. Treated me like a dog. Deeply misogynistic,” Griffin tweeted, with a link to the TMZ video.

Days later, Griffin leveled another accusation at Cohen, saying that he offered her cocaine before getting in front of the cameras for his Bravo show, “Watch What Happens Live.”

In response to that accusation, Cohen tweeted, “I am completely stunned by this story. It is 100% false and totally made up.”

A Bravo spokesperson followed that up, saying, “This is completely false and we are not going to credit it with any more attention.”