Sounds like Kathy Griffin won’t be tuning in when Chris Hardwick returns as host of AMC’s “Talking Dead” — unless it’s to hate-watch.

Comedian Griffin offered a two-word reaction Wednesday, following news that Hardwick would return to the “Walking Dead” after-show, after an investigation into a misconduct accusation against Hardwick.

“F— THIS!!!” Griffin tweeted in response to the news.

An AMC spokesperson said Wednesday that Hardwick would return as host following “a comprehensive assessment by AMC, working with Ivy Kagan Bierman of the firm Loeb & Loeb, who has considerable experience in this area.”

The statement continued, “We take these matters very seriously and given the information available to us after a very careful review, including interviews with numerous individuals, we believe returning Chris to work is the appropriate step.”

Also Read: Kathy Griffin Hit With Invasion of Privacy Lawsuit by Her Neighbors

Hardwick’s ex-girlfriend, Chloe Dykstra, seemed to accuse the host of sexual misconduct in June in a Medium essay. Though Dykstra did not name the former boyfriend, whom she said pressured her into sex and ultimately derailed her career, it was pretty easy to connect the dots to the Nerdist founder.

In her essay, titled “Rose-Colored Glasses: A Confession,” Dykstra said that when she was in her early twenties she dated a man “almost 20 years my senior” who displayed what she called “controlling behavior” — including ordering her to remain in their hotel room while he attended parties at San Diego Comic-Con.

She also accused the man of pressuring her into sex against her will, though she wrote, “To be fair, I did go along with it out of fear of losing him.” Dykstra further accused the unnamed man of having her “blacklisted” following their breakup.

Hardwick encountered considerable fallout after the essay was posted, including a suspension from AMC while the situation was sorted out.

After the publication of Dykstra’s essay, Griffin tweeted that she was “available to be the new host” of “Talking Dead,” though the loss of the potential gig didn’t seem the primary source of the comedian’s ire on Wednesday.

While Griffin’s tweet received some sympathetic responses, other reactions were less than friendly to her stance.

One commenter suggested that, if Dykstra “has evidence, she needs to come forth, now.”

“No, actually she doesn’t,” Griffin shot back. “But, go on with your rapey tendencies. I guess I’m the only one to check your ass, boy.”

“I’m not a Chris Hardwick fan or anything, but, as far as I know, he’s only been accused by one person of abuse, and he denies it,” another commenter responded. “Until there’s any other evidence, we kinda have to make it a he said/she said thing and move on. Unless you have any other information.”

“I love you Kathy but I support Chris. She changed her story multiple times and he had several exes defend him,” read another response. “I just don’t buy her version of events. Just because she’s a woman doesnt mean it’s true.”

“Why F— THIS? The one accusation has been taken seriously,” another Twitter user asked Griffin. “It seemed flimsy to begin with. Many ex girlfriends spoke in his defense. It seems like this case is being investigated properly. Do you know something we don’t?” 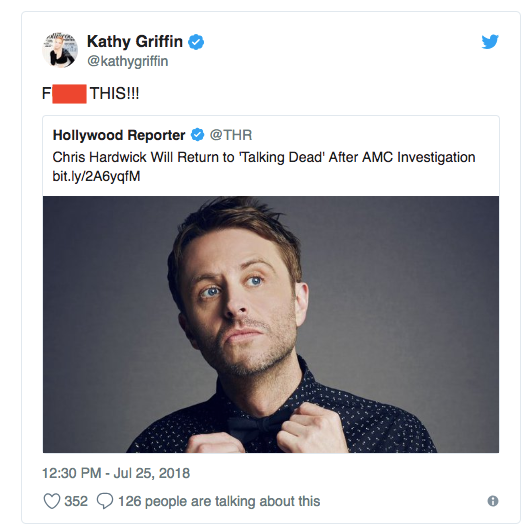