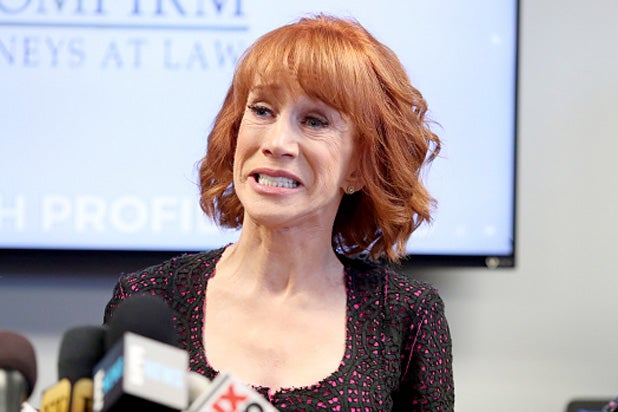 It seems that Donald Trump isn’t the only guy that Kathy Griffin has a problem with these days.

Griffin, who came under heavy fire earlier this year after posing with what appeared to be Trump’s decapitated head, lashed out at “Watch What Happens Live” host Andy Cohen on Friday, after he threw some serious shade Griffin’s way while speaking to TMZ.

In a video published by TMZ on Friday, Cohen — who’s been tapped to replace Griffin as co-host of CNN’s annual New Year’s Eve broadcast, alongside Anderson Cooper — refused to acknowledge that he even knew who Griffin was, repeatedly asking, “Who?” when her name was brought up and declaring, “I don’t know her.”

Also Read: Kathy Griffin Called a 'C-t' and 'Bald D-e' by Her Neighbor, the CEO of KB Home

While some might have interpreted Cohen’s feigned ignorance, Griffin — whose series “My Life on the D-List” ran on Bravo for five years — insisted that Cohen’s comments were a true reflection of his attitude toward her.

“Even when it’s on tape, there are doubters? He is NOT kidding w paps. Was my boss for 10 years. Treated me like a dog. Deeply misogynistic,” Griffin wrote, with a link to the TMZ video.

Griffin did not elaborate on Cohen’s alleged misogynistic behavior.

TheWrap has reached out to Cohen’s spokesperson for comment on Griffin’s remarks.

Even when it’s on tape, there are doubters? He is NOT kidding w paps. Was my boss for 10 years. Treated me like a dog. Deeply misogynistic https://t.co/geqFsLtWy1