An unlikely name popped up in the middle of Sarah Palin’s defamation lawsuit against the New York Times: comedian Kathy Griffin – and she is “thrilled” about it.

On Friday, Times writer Elizabeth Williamson testified before a jury in a Manhattan courtroom how, on June 14, 2017, she and colleagues and editors wrote a draft of the news outlet’s response to a shooting targeting Republican members of Congress at a Virginia baseball field.

Under questioning by Palin’s attorney Shane Vogt, Williamson conceded on the stand that the Times’ editorial titled “America’s Lethal Politics” censuring angry, impassioned political rhetoric did not mention Kathy Griffin’s 2017 photo of her holding the likeness of a bloodied head of then President Donald Trump.

In an attempt to frame the newspaper as decidedly biased, anti-Republican and picking and choosing what to be outraged about, Palin’s team asked Williamson if the paper had written about Griffin’s mock photo. It had not. 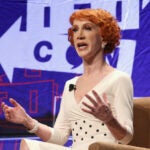 In cross-examination, the Times attorney had Williamson make a distinction between Palin’s rhetoric and Griffin’s gory satirical photo: politics vs. comedy.

“Did ‘America’s Lethal Politics’ address things that comedians were saying?” he asked.

“No,” Williamson answered. “It was addressing political rhetoric and two shootings of members of Congress.”

“I am thrilled to have the distinguished honor of being one of the reasons that Sarah Palin will lose this case in federal court,” Griffin told BuzzFeed News.

Griffin suffered a serious career setback after doing the photo shoot. Although she eventually apologized for the mask stunt, she then later retracted that public mea culpa. She was investigated by the Secret Service and cleared of making actual threats against the president, and later embarked on a comeback tour that sold out dates across the country in 2018. 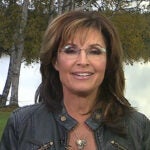 Palin also claimed that the Times editorial incorrectly reported that her political action committee circulated “a map of targeted electoral districts that put Ms. Giffords and 19 other Democrats under stylized cross hairs.”

Palin and the Times’ editorial page editor at the time, James Bennett, are expected to testify next week. 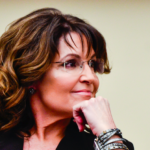